“In the days to come, the team aboard the Transocean Polar Pioneer will work to complete the top portion of the well in anticipation of drilling to total depth once the Fennica arrives on site,” Shell said in a statement.

Burger J is estimated to produce 10,572 bbl in the top hole section, and 915 bbl in the lower well sections.

The UK supermajor received limited drilling approval from the Bureau of Safety and Environmental Enforcement (BSEE) in late July, allowing exploratory drilling activities that consist of only the top sections of wells, and prohibiting the drilling into oil-bearing zones off Alaska.

The limitations are due to the absence of the Fennica icebreaker vessel, which is staging the capping stack needed to conduct drilling activities according to BSEE rules. The Fennica is undergoing repairs in Oregon from damages sustained from an incident in early July.

Greenpeace activists against Shell’s Arctic program were outside the company’s offices on the South Bank today (3 August), to try to encourage Shell employees to join them in averting the drilling program.

The US Geological Survey is estimating that the Arctic holds approximately 30% of the world’s undiscovered natural gas, 13% of its oil, and 22% of its natural gas liquids. The undiscovered resources amount to about 400 billion boe, or 10 times the total of oil and gas produced in the North Sea to date. 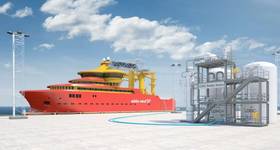