Re-entry into older wells for intervention or decommissioning can be challenging operations when pairing modern technologies with older equipment. Modern blowout preventers (BOPs) and risers are designed to be more robust, which can result in the wellhead becoming the weak point of a system, which is dangerous considering it is a critical component. To mitigate this risk, Trendsetter Engineering has developed and patented the Tether BOP (TBOP) system to reinforce the BOP and improve wellhead fatigue life.

When a wellhead is connected to a BOP stack and riser, the weight and movement of the stack and riser will result in fatigue accumulation in the wellhead. For older wellheads, there may not be much fatigue life left, so Trendsetter developed the TBOP system to arrest motion in the BOP, above the wellhead, by tethering (mooring) the BOP stack to piles fixed on the seafloor.

“By moving the point of fixity off of the wellhead and onto the spiderboard or above, the TBOP system helps preserve the wellhead integrity by isolating the movements above it,” says Brett Morry, global technical manager, Trendsetter.

As a result, further fatigue in the wellhead can be reduced, while adding strength to the subsea equipment.

The TBOP system is comprised of multiple pile assemblies connecting piles surrounding the wellhead to the spiderboard on the BOP stack. This placement prevents the TBOP system from interfering with the emergency disconnect system.

On the BOP, there must be a connection site (thimble) for the end of the mooring line (fairlead) to attach. If the BOP has recovery padeyes, they can be used with shackles or thimble assemblies, for fairleads to attach. If not, the BOP will need fairlead foundation assemblies installed on the spiderboard.

Each pile will be connected to the BOP stack through a pile assembly, which consists of a mooring line, thimble or fairlead assembly, pile top assembly (PTA), load cell – with optional monitoring equipment – and a shipping skid. The mooring line is made of two types of Dyneema rope depending on the load requirements; the thimble or fairlead assembly terminates the mooring line and attaches to the BOP connection site; the PTA is fixed on the piles and uses a winch system to induce a load on the tethers.

The piles used will depend on the soil conditions on the site. For softer, less consolidated soils, piles can be suction pumped or jetted into the soil, but for harder, more consolidated soils gravity-based piles, using steel plates for weight, would be more appropriate.

Installation of the TBOP system is performed entirely off the critical path.

First, the piles need to be installed on location before the rig arrives. For gravity-based piles, a vessel of opportunity (VOO) with a crane can be used, but suctioned or jetted piles may require a larger vessel. Afterwards, PTA installation can be performed using the downlines of the VOO. Then, following the BOP’s installation, a conventional work-class remotely operated vehicle (ROV), with a torque tool, will attach the fairleads to the BOP and load the mooring lines. To prevent overloading one side, the ROV will attach the fairleads in a pre-determined sequence, and bring the tension up in stages, following the sequence until the tension is brought to the pre-calculated load.

Though the TBOP system was only developed within the last year, it has already been deployed in the Caspian Sea and the UK North Sea.

In the North Sea, an operator was performing a two well plug and abandonment campaign 160km northeast of Shetland, in an area which has recently seen significant wave heights of 7m. To ensure adequate wellhead fatigue life, the operator decided to reinforce the BOP with the TBOP system, which is currently installed on the first well.

Due to the heavily consolidated soil, four 40-ton gravity-base piles with 2ft skirts were chosen for the site and installed in Q2 2016. Using a VOO, the PTAs were installed in Q3, and by Q4 the BOP was connected to the mooring lines and fully tensioned (4-5-ton) in an operation that took six hours, off the critical path.

Using independent third party calculations, the system was designed to improve the wellhead’s fatigue life by a factor of 1000, which has since been verified by data obtained from accelerometers placed on the riser at the first well, says Jim Maher, president, Trendsetter Vulcan Offshore.

Trendsetter does not only see the TBOP system being used to mitigate issues with fatigue life, but also to mitigate the potential for drive-off/drift-off.

When drilling with a dynamically positioned (DP) vessel, operators need to be aware of the effect that drifting off center will have on subsea equipment. However, the TBOP system can be installed to strengthen the BOP, increasing the wellhead’s tolerance to the stresses of rig deviation.

“A lot of clients are interested in using DP vessels in shallower waters, so we see a good market for the TBOP technology,” Maher says. “The system can be used to reduce the bending associated with a drive-off event and therefore extend the operability range of DP vessels into shallower water.”

This benefits operators by allow them to utilize DP vessels, already on charter, in shallower areas rather than having to charter separate moored vessels, Morry says.

“We also see potential applications as the industry looks into using 20K or high pressure/high temperature BOPs,” Maher says. “Some operations may be easier if they’re able to tether it and strengthen the wellhead.” 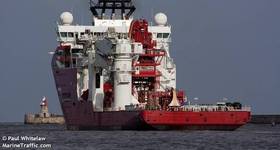