The Internet of Things is becoming ever more embedded in the oil psyche. Steve Hamlen reports.

The increasing use of sensors coupled with the progress in data collection and management not only offers the oil and gas industry great cost reductions, but also the chance to fully embrace the march towards “Industry 4.0” – where computers and automation merge, where the Internet and manufacturing are part of one digital supply chain.

“This is the Internet of Things (IoT), where computers and automation come together in an entirely new way, with robotics connected remotely to computer systems equipped with machine learning algorithms that can learn and control the robotics with very little input from human operators,” Dave Mackinnon, head of Technology Innovation at Total E&P UK, told delegates the Subsea North East Conference & Exhibition in Newcastle, England, mid-June.

Mackinnon described this as a clash between two worlds where you can no longer be in just the machine camp or the Internet camp. In the near future, you will need to be in both or face serious challenges to survive.

“In an IoT world, many companies will discover that being just a manufacturing company or just an Internet company will no longer be sufficient; they will need to become both – or become subsumed in an ecosystem in which they play a smaller role,” Mackinnon said.

Industry 4.0 is this merging on computers and machines. The pre-cursers, he says, were:

Industry 1.0 – Steam, which produced the first machines that mechanized some of the work that people did. Industry 2.0 – Electricity, which created the assembly line and the birth of mass production. Industry 3.0 – Computers, which brought about the beginnings of automation and saw robots and machines starting to replace human workers on those assembly lines.

Mackinnon believes that the oil and gas industry is heading towards a digital supply chain that will revolutionize the sector. However, such a system is well advanced in many other industries, so oil and gas must play catch-up.

He used the example of a supermarket planting a lettuce in one country and tracking it all the way from harvest to transport to being placed on a shelf in a UK store – all tracked and traced from start to finish.

“Can we do that,” Mackinnon asked the audience, before citing other examples, such as Nike, which allows a customer to choose a training shoe online, customize it with regards to colors, laces, size and then click for delivery. All of this data is stored and managed.

Mackinnon suggested that this has great potential in the oil and gas industry, such as tracking and tracing the lifecycle of a subsea Xmas tree. Collecting and using the data of when and where it was manufactured, who bought it and where it was used, including any maintenance work required, will help any future buyers of the hardware make an informed decision: “This is Industry 4.0,” he says.

“As an oil and gas major in the North Sea, how are we involved in manufacturing and how do we extract value,” Mackinnon asked.

Total’s objectives, he says, were to: reduce overall costs (capex/opex); deliver on-time and on-budget; facilitate future technology; understand and manage risk; and in the North Sea, go smaller and deeper to “push the HPHT [high-pressure/high-temperature] envelope.”

The driver to this strategy is to ensure industrial knowledge transfer to help spur innovation and technological progress. Towards this goal, Total has launched its second Plant 4.0 start-up incubator, joined by Air Liquide, AREVA, Eiffage, Solvay and VINCI Energies.

“This is the very first multi-corporate Plant 4.0 start-up incubator in the world. The partners’ common goal is to accelerate the deployment of digital technology in industry,” Total said.

In the same way that the telecommunications sector achieved the triple play of merging the telephone, television and Internet into one service, so it seems the oil and gas industry is beginning to understand the benefits of the IoT and Big Data. If it makes sense and saves money, then the opportunities will be seized sooner rather than later, especially with the industry keen to trim spending, improve efficiency and produce new technology.

Autonomous PSVs on the horizon

The project, which ASL launched with Kongsberg last year, will see the development of a light-duty, offshore utility ship to service the offshore energy, hydrographic & scientific and offshore fish-farming industries.

It could also be used as a ROV and AUV support ship and standby vessel, able to provide firefighting support to an offshore platform working in cooperation with manned vessels.

Bourbon and ASL are to join forces to secure the subsidies to finance the effective construction of a prototype vessel, called Hrönn.

ASL had foreseen a catamaran style design, but, since project launch in November 2016, has opted for a steel monohulled vessel, to provide more payload capacity and greater flexibility in the diverse range of operations.

Bourbon’s entry to the Hrönn project comes after the firm joined forces with Kongsberg to develop digital solutions for next generation connected and autonomous vessels. The two companies will execute joint projects to develop new ways of efficient operations in the offshore services industry, with a fast time-to market.

Hrönn’s Sea trials will take place in Norway’s officially designated automated vessel test bed in the Trondheim fjord and will be conducted under the auspices of DNV GL and the Norwegian Maritime Authority (NMA). The Hrönn will ultimately be classed and flagged, respectively.

“We are pleased to be collaborating with such expert partners in the development of Hrönn, a vessel that will show how digitalization and autonomy have the potential to revolutionize the offshore services market,” said Stene Førsund, EVP Global Sales and Marketing, Kongsberg Maritime. 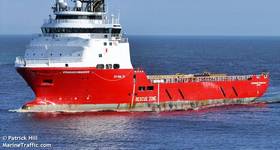