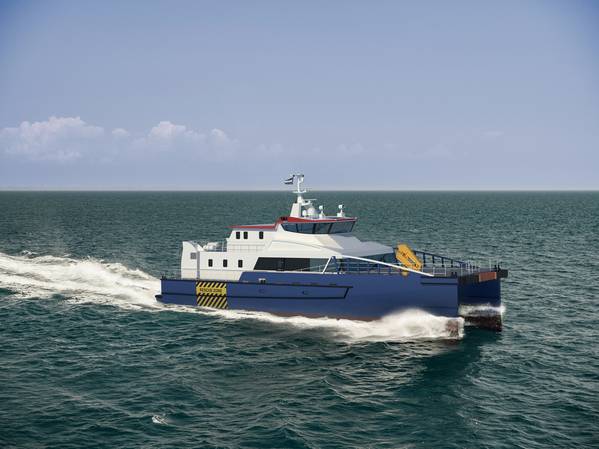 The new design builds on Damen designs that have been proven in the European renewables market. The main premise is the patented Damen Twin Axe bow design, which combines the Axe Bow with a catamaran hull to allow the vessel to cut through waves instead of slamming, thereby improving seakeeping and onboard comfort. Damen’s Twin Axe FCS 2610 has sold more than 45 vessels.

Damen recently developed this theme further with the FCS 2710 – a new FCS vessel one meter longer than its predecessor and, significantly, with an additional meter in water clearance, enabling the vessel safely extended operational windows.

The FCS 3410 further develops this theme, tailoring the concept to meet the requirements of the emerging U.S. offshore renewables market, as Daan Dijxhoorn, Damen sales manager U.S., explained, “This vessel is well suited to numerous markets, however, we have given it long endurance capability so that it can remain at sea for up to five days at a time – a requirement typically seen in U.S. operations. To facilitate this we have designed a vessel 6 meters longer than previous FCS types, able to host more on board personnel and accommodation.”

The FCS 3410 also draws on the Damen Accommodation Support Vessel 9020, a walk-to-work vessel designed for transporting and providing accommodation for offshore personnel for up to a month.

Daan continued, “There’s a real sense that offshore wind is building momentum. The Block Island Wind Farm off Rhode Island is still the only wind farm in operation off the coast of the U.S.A. nearly two years after it opened, but a number of states are pushing ahead with their own plans for offshore renewable energy development.”

Massachusetts currently leads the way in these developments with a target of 1,600 MW generated by wind energy by 2027 and having an 800 MW project planned to begin next year. New York, New Jersey and Maryland also have plans in the pipeline.

The FCS 3410 would be built on location in the United States by licensed partner yards in order to comply with Jones Act requirements. This process, the Damen Technical Cooperation, ranges from simple licensing up to the delivery of full materials package, including technical support.