Argentina to Export First LNG in 2019 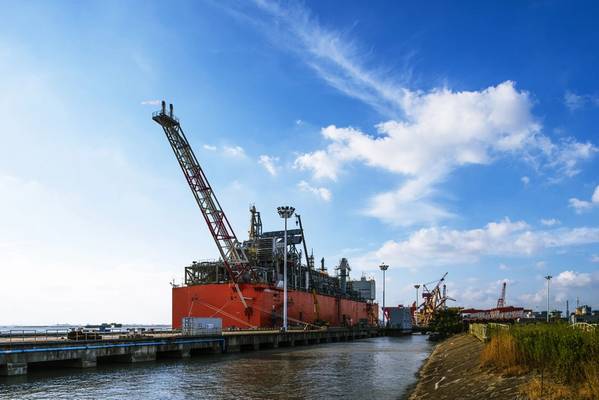 The barge-based floating liquefaction unit Caribbean FLNG will be redeployed as Tango FLNG to the Port of Bahía Blanca in the second quarter of 2019. (Photo: Wison Offshore &amp; Marine)

Argentina is due to begin exports of liquefied natural gas from a part of its vast Vaca Muerta shale gas resource next year through a floating LNG liquefaction (FLNG) vessel provided by Exmar, the Belgian shipping company said on Wednesday.

The operations, due to start in the second quarter of 2019, will introduce Argentina into the small club of around 20 countries exporting LNG while the FLNG will be only the world's fourth and the smallest.

The country's state-controlled oil company YPF signed a 10-year agreement with Exmar to deploy the barge-based FLNG, formerly known as the Caribbean FLNG, at Bahia Blanca on the east coast about 400 miles south of Buenos Aires.

Argentina will continue to have the ability to import LNG through the Excelerate Expedient FSRU moored in Escobar, close to Buenos Aires. The new import vessel will now be named Tango FLNG and is expected to ship up to eight cargoes a year.

"Thanks to the commercial relationship with Exmar, we are now able to add value to the resources extracted from Vaca Muerta, and take full advantage of the seasonal opportunity with Asian markets and our unique location to serve demand centers," YPF President Miguel Gutierrez said in the statement.

Vaca Muerta is similar to the shale gas deposits that have rejuvenated the U.S. energy industry. The Argentine play is one of the largest reserves of unconventional hydrocarbons on the planet, though much of its oil and gas remains untapped.