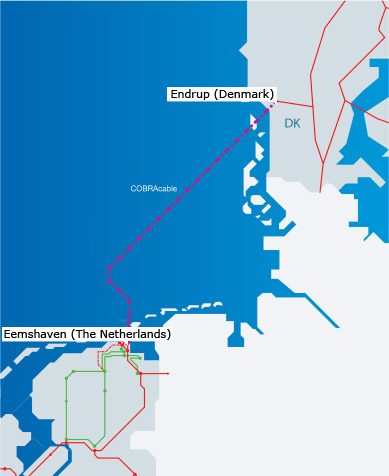 A subsea power line set to link the networks of Denmark and the Netherlands reached the Dutch coast on Friday as part of plans to share excess electricity from wind farms and other sources.

The 325 km (202 mile) long COBRAcable, short for Copenhagen, Brussels and Amsterdam, has a capacity of around 700 megawatts (MW) and is expected to become fully operational in the third quarter of 2019.

"This is an important step towards the integration of electricity networks in western Europe," said Jeroen Brouwers, spokesman for Dutch grid operator TenneT.

"We will now have the first link between the Netherlands and Denmark, adding to existing connections with Norway and Britain."

TenneT and Danish counterpart Energinet.dk have invested 621 million euros ($705 million) in the project, supported by a 86 million euro subsidy from the European Commission as part of efforts to build a European electricity network.

The link will run from Endrup in Denmark to Eemshaven in the Netherlands when completed.

Rapid growth in renewable energy generation including wind and solar has increased the need for better interconnections between countries, prompting grid operators across Europe to invest in new cross-border lines.

Wind turbines already supply around half of the total electricity needed in Denmark, but last year delivered only around 2 percent of all energy in The Netherlands.

The Dutch plan to build wind farms with a capacity of up to 11,000 MW in its part of the North Sea in the next decade.

"The Dutch will by then have passed the Danes with their capacity in wind energy," Brouwers said.

"This network will guarantee the efficient use of all that energy, by making it possible to import and export abundant electricity."