US Military Seeks Rules for Drilling in Gulf of Mexico

By Timothy Gardner and Jessica Resnick-Ault May 11, 2018 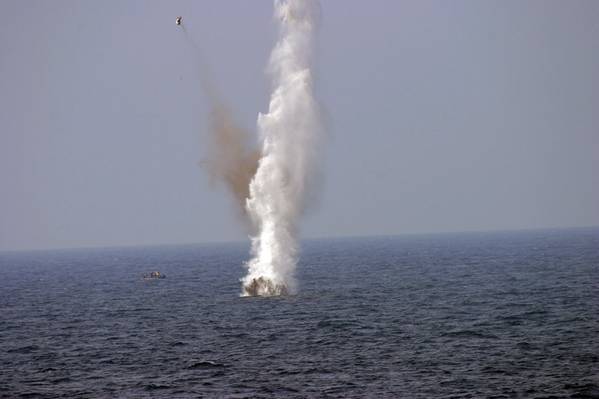 File photo: U.S. Navy personnel detonate a floating mine during an exercise in the Gulf of Mexico (U.S. Navy photo by Patrick Connerly)

An expansion of oil drilling in the eastern Gulf of Mexico would interfere with U.S. military testing unless the Pentagon and another agency develop rules to govern the work, the U.S. Department of Defense said in a report this week.

The Defense Department concluded in a report it sent on Wednesday to U.S. lawmakers that drilling east of the Military Mission Line in the Gulf of Mexico, a demarcation more than 200 miles (320 km) west of Florida, would harm military testing operations without the rules.

"Military flexibility in the region would be lost and test and training activities would be severely affected," without mutually agreed restrictions between the Pentagon and the Interior Department on the drilling, said the report, a copy of which was seen by Reuters.

The report confirmed that "collaboration between the Department of Defense and Interior will enable the successful coexistence of continued military training and expanded American oil production," said Erik Milito, a director of upstream operations at the American Petroleum Institute.

Randall Luthi, the president of the National Ocean Industries Association, said the report showed, "There is a lot of ocean out there and while there will be devils in the details, the overall message from the Pentagon should be interpreted as cooperation and coordination." Interest in drilling offshore in the United States is high as the Trump administration pursues a policy of maximizing oil, gas and coal output for domestic and foreign use.

In January, Interior Secretary Ryan Zinke said the administration would not allow drilling off Florida after the state's governor protested that opening it up would harm tourism.

But drilling far off Florida is still in play. The Departments of Defense and Interior have been holding meetings on drilling in the region that are likely to go on for months. A Defense Department spokeswoman did not immediately comment on whether those meetings were hammering out an agreement on drilling.

In the most recent Gulf of Mexico auction, held in March, many bids were made on acreage in the formation closest to the Military Mission Line known as DeSoto Canyon.

BP Plc bid on the most contiguous leases of any participant anywhere in the Gulf, staking its claim on about 171 square miles (443 sq km) in DeSoto Canyon, about 100 miles (160 km) off the Louisiana coast.