A flurry of major gas discoveries in East Africa in 2012 shone a spotlight on the region. Four years later, while efforts to bring some of those resources to market via LNG developments are progressing, the exploration effort offshore appears to be in the doldrums. Elaine Maslin reports.

Activity had been tentatively returning to Somalia, but the country is not quite a ripe exploration province, yet. Somalia, which is not far from the now-proven basins to the south in Tanzania and Mozambique, had been a target for a string of majors before the early 1990s, such as BP, Chevron, Conoco, Eni, Shell, ExxonMobil, etc., according to UK-based exploration firm Soma. But, by 1991, they had all claimed force majeure due to civil war.

Things have changed, to a point. There has been greater stability in the country and the federal government has been active in re-opening the exploration play, according to Soma. There’s a lot of underexplored space. Soma, whose chairman is ex-UK Prime Minister Michael Howard, says that only six offshore wells have been drilled in shallow waters along the 2300km eastern offshore basin, and none in deepwater.

Soma says that a US Geological Survey estimate puts total undiscovered resources at 16 billion bo and 260 Tcf of gas in the provinces bordering its offshore evaluation area in Somalia’s offshore waters. Nearby discoveries include huge gas resources offshore Mozambique and Tanzania and heavy oil discoveries off Madagascar, according to Soma.

However, there has been little positive news from Soma since December last year and the firm has faced difficulties, not least accusations over bribery claims.

Furthermore, Somalia remains in a dispute with neighboring Kenya over their maritime border, with 100,000sq km in the Indian Ocean at dispute and recent hearings in the International Court of Justice seemingly having little effect, partly due to not being recognized by Kenya. This has led to a United Nations (UN) proposal that a moratorium is placed on oil deals in Somalia. The country is also home to 22,000 African Union personnel who are backing government forces in a fight against al-Qaida-linked group al-Shabab, which has been trying to topple the government since 2006. The UN Monitoring Group has also warned that deals on oil exploration may fuel violence and corruption in the fragile state, Bloomberg reported.

Exploration offshore Kenya, likewise, appears to have dropped off. Houston-based Anadarko says that it has about 3.7 million acres offshore Kenya across three deepwater blocks. However, after a duster in 2013, plans for a deepwater exploration well in 2015-16 didn’t materialize and the company has said very little about Kenya for some time as it focuses its efforts on monetizing Mozambique.

BG Group (now part of Shell) made a discovery on the Sunbird-1 well in 2014, but its partners, PTTEP and Pancontinental, pulled out in 2015. According to a report by the UK Department for International Development report from August 2016, BG Group confirmed that its discoveries were not yet deemed of commercial value.

Apache drilled the Mbawa-1 well on Block L-8 in 2012, discovering gas, but later exited the license. Exploration in Blocks L-21, L-23 and L-24, operated by Eni, has been put on hold pending a resolution of the maritime border dispute with Somalia, as has Block L-22, operated by Total. Meanwhile, independents, including Ophir and Erin Energy, have been seeking partners for exploration, but with little apparent movement.

“Offshore Kenya, there have been a few surprises around the operating environment, with currents up to 3-4 knots,” says Alasdair Reid, research analyst, S&E Africa Research, Upstream Oil & Gas, Wood Mackenzie. “It’s not something that cannot be overcome, but the technical challenge will increase the cost of wells.”

The lack of activity doesn’t appear to have put off the Kenyan government, however. It was reported to have created 17 new oil exploration blocks, which it plans to auction off in 2017. It’s unclear if any are offshore. According to a 22 October 2015 Ecobank report, the National Oil Corp. of Kenya had sought expressions of interest for multi-client 3D seismic offshore Kenya, covering the Lamu Basin, with a view to the data being available for the 2017 round.

More is happening offshore Tanzania where operators are working to get proven reserves to market, through a subsea to shore LNG development, rather than seeking new resources. The exception is Shell, which seeks to take advantage of low rig rates to prove up some additional volumes on Blocks 1 and 4.

But, the country is also not without its disputes. Tanzania has a long standing dispute with the semi-autonomous state Zanzibar. The dispute is over exploration in the Zanzibar archipelago, Reid says. Shell has been caught up in this.

This isn’t stopping Shell from exploring, however. The oil major has a drilling program, due to start Q4 this year, comprising two wells on Blocks 1 and 4, targeting >1 Tcf of gas, says partner Ophir Energy. Shell became operator on the blocks after taking over BG Group earlier this year.

The well on Block 1 will target Kitatange, with an estimated mean recoverable volume of 1.1 Tcf. The well on Block 4 will target Bunju with an estimated 1.4 Tcf. The wells, which have been given 40% chance of success, will fulfill outstanding exploration requirements on the licenses, according to Ophir, which estimates its 20% share of the costs is US$20 million for both wells.

Meanwhile, pre-front-end engineering and design (FEED) is progressing on an onshore LNG plant, which would take in the huge discoveries made in Blocks 1 and 4, operated by Shell, as well as Block 2, held by Statoil (operator) and ExxonMobil. FEED is expected to start following the completion of the LNG site acquisition, the geotechnical investigations and engineering studies.

Concept selection for the upstream part of the project will determine the configuration and production rates from each of the fields, Ophir says.

Last year, Statoil said it expects to make a final investment decision on its Block 2 finds in 2018, at the earliest, with first production not before 2022-23.

“Shell sees this as an LNG project that ranks well in their portfolio,” says Ophir’s COO Bill Higgs, in mid-September. “Shell is currently looking for ways to reduce the cost structure for the LNG project.”

Statoil, as well as being operator on Block 2, also recently bought into Block 6, acquiring a 12% stake from Petrobras, according to Norwegian media reports.

“From our perspective, Tanzania is still behind Mozambique,” Reid says. “They are working through the government approval process.”

More broadly, there’s also a question about demand for LNG. “It’s important to understand the global LNG demand picture to put these East African projects in context,” Reid says. “We see a window for more supply post-2024, after the current period of oversupply. These projects will have to be cost-competitive globally, but the volumes [in East Africa] are huge and well located for Asian markets.”

Overall, East Africa offers a number of interesting longer term plays, Reid adds. How long, longer term is, is yet to be seen.

“There’s a lot of prospective offshore acreage in South Africa,” says Alasdair Reid, research analyst, S&E Africa Research, Upstream Oil & Gas, Wood Mackenzie. “Most of the big players are in there. But, until the regulatory environment is resolved, we’re not going to see much exploration activity.”

Despite exploration having first started offshore South Africa in 1967*, currently, there’s little offshore production, apart from the PetroSA-operated offshore Block 9 fields, located on the southern coast in the Outeniqua Basin There’s also a project to develop the Ibhubesi gas field.

The main areas seen as being attractive are the Bredasdorp Basin of southern South Africa and off the west coast, near the maritime border with Namibia, in the Orange Basin.

“The key issue for South Africa is the latest petroleum bill,” Reid says. “There’s a lot of uncertainty around the Mineral and Petroleum Resources Development Bill and as a result there has been a slowdown in activity.” It’s a priority of the South African government after ratings agencies raised this uncertainty, he says, so there should be some clarity next year.

Despite the uncertainty, there’s a lot of interest. CGG recently completed a multi-client airborne gravity and magnetic survey offshore South Africa, with two aircraft acquiring 78,000 line-km of offshore data across Cape Agulhas (West Bredasdorp area) and offshore Durban (Eastern Margin area), areas that were due to be offered for licensing this year. CGG says it had significant pre-funding from the oil industry for the project.

The areas are not without issues. In the Agulhas, sea conditions, currents and a narrow drilling window add to the challenges, Reid says. Total and Canadian Natural Resources International tried to drill the Brulpadda-1 exploration well in late-2014 (a well that was aimed at testing a new deepwater play), but didn’t reach total depth due to mechanical issues on the rig, according to Tower Resources, which has a neighboring permit. Tower says that Total has indicated it could return in 2016-17. “It just highlights that it’s not benign ocean conditions,” Reid says. This will mean bigger costs too.

“As a longer-term play there’s no reason why it couldn’t be interesting,” Reid adds, noting that South Africa also has a strong supply base, as it’s often used as a base for rigs on Africa’s West Coast.

*According to Impact Oil & Gas. 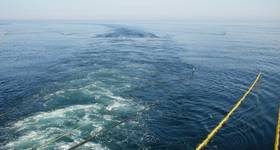 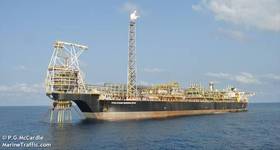