In cooperation with the Puerto Rico Electric Power Authority (PREPA), the approval is to site, construct, and operate the proposed project.

The Aguirre Offshore GasPort project will be a floating liquefied natural gas (LNG) terminal with the same capabilities as a land-based terminal. The terminal will consist of a floating storage and regasification unit (FSRU), minimal infrastructure to moor the vessel, and a subsea pipeline to deliver the gas onshore. The facility will provide fuel to PREPA’s Central Aguirre Power Complex. Fuel cost reduction and environmental improvements, such as improved air quality and reduced barge traffic in the environmentally sensitive Jobos Bay, are the primary drivers for bringing the Project to Puerto Rico, Excelerate said.

The offshore marine LNG receiving facility (Offshore GasPort) is located about 3mi off the southern coast of Puerto Rico, near the towns of Salinas and Guayama, and a 4.1mi-long subsea pipeline connecting the Offshore GasPort to the Aguirre Plant.

Excelerate will continue to work with FERC and cooperating agencies in preparation for the commencement of construction, which is estimated to begin 1Q 2016, with an in-service date of 2Q 2017.

“The order represents an important milestone in the development of the project,” said PREPA’s interim executive director, Carlos Castro. “This project is critical for PREPA to reduce the cost of energy in Puerto Rico and to reduce the emission of air pollutants.”

Global demand for FSRUs are on the rise, and Excelerate operates the largest fleet of FSRUs in the industry.

Its vessels are purpose-built LNG tankers that can vaporize LNG and discharge natural gas as a liquid at a conventional LNG receiving terminal, or as gas through the FSRU’s connection with a subsea buoy in the hull of the ship, or as gas through a high-pressure gas manifold from the vessel’s LNG loading arms. 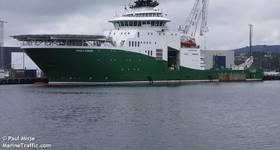 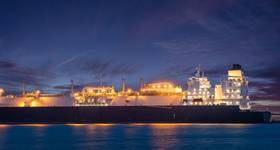