About two-and-a-half years after construction began, Japan’s Inpex Corp. launched the hull of its Ichthys FPSO from the dry dock of the Daewoo Shipbuilding and Marine Engineering yard in Okpo, South Korea, the Japanese operator announced today. The project reached its halfway point weeks ago on 25 June.

The giant hull launched Sunday, 6 July and is 336m long, equivalent to three soccer fields. It is now positioned quayside for further construction.

SBM Offshore announced 2 February 2012 that it won the engineering, procurement, fabrication and supply of the turret and mooring systems for the Ichthys FPSO. At that time, the Dutch FPSO provider listed the turret dimensions as 20m in diameter, 65m tall, and weighing 7000tons.

Currently in detailed EPIC, the Ichthys LNG project is scheduled to start production by the end of 2016, with gas sourced from the Ichthys gas and condensate field in the Browse basin off Western Australia. The FPSO will be moored around 3.5km from the project’s central processing facility, where it will then be transported through a subsea pipeline more than 885km to a proposed processing plan in Blaydin Point in Darwin’s Middle Arm Peninsula.

Ichthys will have an initial capacity to produce 8.4mtpa of LNG, 1.6mtpa of liquefied petroleum gas, as well as approximately 100,000b/d of condensate at peak. 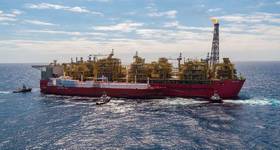