Production stopped on Siri's MOPUstor-type platform in August 2009 after a routine inspection revealed cracks in a subsea structure connected to the oil storage tank, possibly caused by platform movement.

Production resumed in January 2010 following implementation of safeguarding measures, which included installation of a temporary seabed support structure beneath the wellhead caisson sponson to forestall further damage (OE November 2009). Dong's share of production from the Siri area including tiebacks in 2010 was about 1.8 million boe.

A permanent repair solution announced in June this year was flatly rejected by Norwegian licence partner Noreco, who favoured less costly measures (OE July). Dong, however, contended that the Noreco plan would not fully reinstate platform integrity. The dispute was eventually resolved in July with the Danish operator's agreement to buy out Noreco's 50% share in the Siri field for DKr70 million, following which the Danish authorities gave their approval to proceed with the permanent repair work.

Steel cable stays of a kind more commonly associated with bridge building are to be installed between the platform legs and a new seabed support structure added to support the 900t wellhead caisson, the repair costs being evenly split between 2H 2011 and 2012 when the project is scheduled for completion. Subsea 7 has an offshore installation contract, worth about $220 million, on a call-off basis under its engineering and construction frame agreement with Dong. The scope involves engineering, procurement, fabrication and all associated construction and commissioning activities.

The cable stays will be installed at the end of this year and the tripod guide support structure in the second half of next year. More immediately, explains Søren Gath Hansen, Dong Energy's exploration & production EVP, ‘entering into the winter season where we have higher waves, we will stabilise the platform by putting in gravel in the connection between the platform legs and the oil tank, a temporary solution that reduces the flexibility of the platform, and we have also introduced a tight programme for demanning the platform and shutting down production if the median wave exceeds 6m. It is important to us that we are within ALARP (as low as reasonably practicable) design criteria.' The gravel is due to be installed this month and temporary demanning occurred in the second week of September.

‘Actually the size of this repair solution is almost a redevelopment of the field,' explains Hansen. ‘We take the safety and the integrity issues very seriously.' There will be 500 people working on the project with different sub-contractors, with equipment being produced as far afield as Lithuania and Poland.

‘I should have liked, however, for it to be something that would create new oil production, but this should give us at least 10 more years from the Siri area, an area where we still see further production both from existing fields [Cecilie, Nini, Nini East and Stine – all tiebacks to Siri], and we shall also be carrying out exploration drilling.' There are several prospects in the area, and a plan to drill an exploration well in 2013, but this still needs licence approval as it falls outside the existing licence area.

Dong Energy sees West of Shetland as an E&P growth area, then frontier areas in the Barents Sea and Greenland, as well as prospects in the mature Danish sector. The company now has 71 licences, with more in the UK and Norway than in Denmark.

The UK E&P activities started in 2001 upon being awarded three exploration licences. Today the portfolio includes 24 UK licences and two Faroe licences, covering a total area of some 14,000km2. Currently Dong E&P operates eight licences and lays claim to being the only company to have a direct interest in all the existing potential developments in the region, including the Total-operated Laggan-Tormore development approved in early 2010 and now under construction.

‘We have preferred starting up West of Shetland, having a large enough portfolio of mature assets in Denmark,' explains Hansen. In addition to Laggan-Tormore other discoveries in the area include Cambo, Edradour, Glenlivet, Rosebank (under evaluation by operator Chevron) and Tornado. Edradour and Glenlivet are possible tiebacks to the Laggan-Tormore export line, although a direct line back to the Laggan-Tormore gas plant is another option for Glenlivet, because of technical compatibility and commercial issues with the export line option. Drilling of the Laggan-Tormore production wells starts in 2H 2012 using the semisubmersible rig West Phoenix .

The exploration budget for 2012 has not yet been finalised, but could include an exploration well on Glenrothes prospect. There is also likely to be another appraisal on Cambo.

Further afield, Dong will spud an exploration well – Zapffe – in the Barents Sea next month, using the semisubmersible rig Aker Barents. In Greenland, Dong is participating in two licences, in the Puilasoq one as operator, in partnership with ExxonMobil, and as a partner in Qamot with ConocoPhillips as operator. There are no immediate drilling plans here.

Back home in the Danish sector, Dong is co-operator with Hess on the South Arne field and responsible for drilling. Underbalanced drilling will be utilised for the 11 wells involved in South Arne's third phase. Drilling will start next year, with first oil due in 2013. A final investment decision on Hejre (Heron), a sizeable field with reserves of a little under 200 million barrels where Dong is the operator, is slated for the beginning of next year with first oil anticipated in 2015.

Hejre is a challenging HP/HT development, involving a standalone manned steel platform for which tendering is currently under way. More recently there has been a new find, Solsort (Blackbird), of about 50 million boe. OE 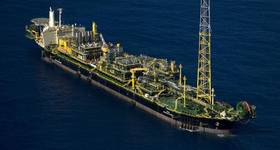 BW Energy to Buy Saipem FPSO in Brazil for $73M