Barents under the spotlight

2017 is set to be a record year for exploration in the Barents Sea, with one prospect in particular getting most of the attention. Edison Investment Research’s Elaine Reynolds explores the scene.

The Barents Sea has been the focus of intense industry interest this year with Statoil having drilled one of the most high-profile exploration wells worldwide in 2017.

The Korpfjell prospect, at the northeastern margin of the South Barents, was described by the operator as being high risk/high reward. Partner Lundin believed that the structural closure could be over four times the size of that seen in the giant 1.9-3 billion bbl Johan Sverdrup field and that the prospect had a multi-billion barrel oil potential.

The well, drilled in just over two weeks in August, did not live up to expectations, encountering non-commercial quantities of gas. The well was the first to be drilled in this frontier area of the Barents, close to the maritime border with Russia, that was only offered for the first time as part of Norway’s 23rd licensing round in 2016. Despite this disappointment, Statoil is planning to drill a further well on the license in 2018, and will also look to drill a well on the Signalhornet prospect in PL857, 300km to the south of Korpfjell.

Korpfjell was one of 15 exploration wells planned for the Barents this year, making 2017 the busiest year for exploration here since the 12-well high in 2014. In addition, in 2017 the Norwegian Petroleum Directorate doubled its estimate of the undiscovered resources held in the Barents Sea to just under 18 billion boe, by including the eastern part of the northern Barents. This has increased the Barents share of undiscovered resources on the Norwegian Continental Shelf (NCS) from 50% to 65%.

Although exploration began in the Barents in 1980, to date there are only two fields onstream: the Statoil-operated Snøhvit gas development and the Eni-operated Goliat. A number of significant discoveries have been made since 2011, and in 2014 the Barents Sea accounted for the largest number of discoveries and the biggest resources proven in the NCS.

The discoveries: Statoil’s Johan Castberg, Lundin Petroleum’s Alta/Gohta, and OMV’s Wisting, all have the potential to become standalone projects. Johan Castberg is at the most advanced stage of the three development projects, with a final investment decision due towards the end of this year and potential production in 2022. Appraisal is ongoing at both Wisting and Alta/Gohta. OMV started drilling its Wisting Central III appraisal well in August and the well is designed to gather core data to allow the evaluation of a development concept.

Alta/Gohta sits in the southern part of the Loppa High area of the Barents, which is on trend with Johan Castberg to the west. Together, they are estimated to contain gross contingent resources of 216-584 MMboe, of which 125-400 MMboe is attributed to Alta. Lundin drilled an appraisal well, Gohta-3, in 2017, to evaluate the northern part of the Gohta discovery, but the well encountered only traces of hydrocarbons in poor quality reservoir and will result in a downgrade to the field resource estimate, which is due to be updated by the end of 2017.

The company was more successful with its Alta-4 appraisal well, which was completed in July 2017, and encountered a 48m gross hydrocarbon column and tested at stabilized rate of 6050 bo/d. The well also demonstrated the presence of very good reservoir together with good communication across the reservoir. Data from this well and a geological sidetrack will be used to assist with placement of a horizontal well for an extended well test that is planned for next year.

Lundin and Statoil will account for the majority of the exploration wells drilled in the Barents in 2017, with five exploration wells each. Results so far this year have, however, been disappointing for both companies. Lundin has drilled two wells focused on the Loppa High area to the north of Alta/Gohta. Neiden and Filicudi both discovered oil, with lower resources than estimated pre-drill. Neiden was a carbonate prospect on trend with Alta/Gohta targeting resources of 204 MMboe, but post results this has been revised to 25-60 MMboe. The discovery reduces the risk of the Børselv prospect, 15km north and up dip from Neiden. Børselv is now being drilled, targeting 244 MMboe with a geological chance of success (CoS) of 39%.

Filicudi discovered estimated resources of 35-100 MMboe, down from a pre-drill estimate of 258 MMboe. Although lower than expected, Lundin still estimates that the Filicudi trend holds up to 700 MMboe and plans to drill two further exploration wells this year that have been de-risked by Filicudi. Hufsa is estimated to hold 285 MMboe resources, and Hurri to hold 218 MMboe. Both prospects carry the same estimated CoS of 25%.

Statoil has also had mixed results from its 2017 exploration program in the Barents. Prior to spudding Korpfjell, it had drilled three of its five planned exploration wells. The first, Kayak, sits to the north of Filicudi and found 25-50 MMbbl of recoverable oil in moderate to poor reservoir. Statoil will consider tying the discovery back to Johan Castberg, which is around 23km to the north east of Kayak. The remaining two exploration wells, Blaamann and Gemini Nord, were both expected to be oil bearing, however both encountered gas. Blaamann is estimated to hold 1.5-3Bcm gas and could add volumes to Snøhvit, 21km away.

Gemini Nord sits to the north east of Wisting and has been declared to be a non-commercial gas discovery. Following Korpfjell, Statoil’s final exploration well this year is expected to be Koigan Central to the north west of Wisting, but beyond 2017, Statoil is likely to continue exploring the region, with recent reports that it is looking to secure two additional rigs to drill in the Barents in 2018 and 2019.

A positive result at Korpfjell would have been a potential game changer for the Barents. One of the first ways to gauge any increased industry interest will be in the 24th licensing round, with applications due by 30th November and awards expected in 1H 2018. Some 102 blocks are on offer, of which a record 93 blocks are up for grabs in the Barents. More than half of these blocks are north of the most northerly discovery so far, Wisting, while a number are located in the eastern portion of the Barents, including three blocks immediately to the south of Korpfjell.

The round also includes 20 blocks that sit within 100km of the Bear Island nature reserve and this has attracted criticism from environmental groups. Norway’s Environment Agency has called for the blocks to be withdrawn from the round and to reduce the perimeter around the island to 65km.

The Barents has become a focus for environmental groups, with Greenpeace now targeting Statoil as its main target following Shell’s withdrawal from the Arctic. However, given the undiscovered potential believed to be sitting in the Barents, combined with relatively benign conditions compared to other Arctic regions, exploration and development activity is set to continue.

Elaine Reynolds is an analyst in the Oil & Gas team at Edison Investment Research. Prior to joining Edison, she worked as a Petroleum Engineer for Texaco and Shell in the North Sea, Oman and The Netherlands. She holds a BSc in Chemical Engineering from Heriot-Watt University.

As OE went to press, it was reported that Statoil is planning development of the Askeladd field. It will connect into Snøhvit, a subsea tieback to Melkøya LNG plant near Hammerfest. Start-up is expected in 2020-21. Earlier this year, Danish engineering house Ramboll won a front-end engineering and design contract for the project. 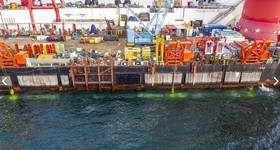