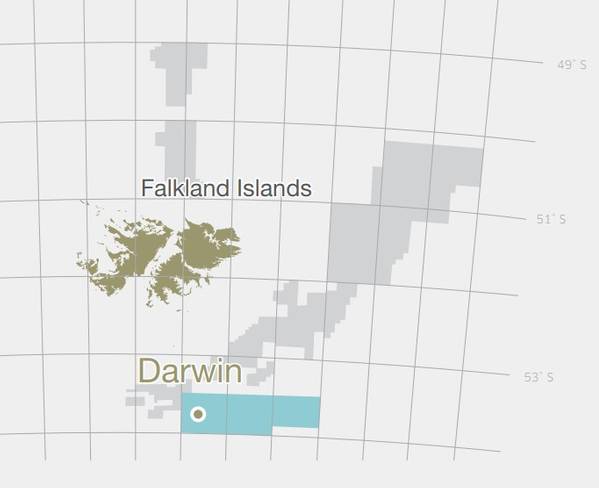 Oil and gas company Borders & Southern Petroleum said Thursday it had secured the extension of its Production Licences PL018, PL019, PL020, including the Darwin Discovery Area, offshore the Falkland Islands.

The offshore licenses were due to expire on the December 31, 2022.

After applying for a two-year extension, the company has received confirmation from the Falkland Islands Government that the revised expiry date will be December 31, 2024.

On November 30, Borders & Southern said it was committed to advancing its 100% interest in its large gas condensate discovery at its Darwin asset, which contains over 3.2 TCF GIP (unrisked, Best Estimate) and 462 MMbbl of Liquids designated Contingent & Prospective Resources (unrisked, Best Estimate), split across Darwin East & West, and as independently assessed under the SPE PRMS Standard

Scoping project economics by management suggest that a phased development project with initial production of 26,000 bbl/d from Darwin East could deliver NPV10 of $4/bbl to $10/bbl dependent on oil price (range $60 to $90 per barrel), the company said at the time.

Borders & Southern said on November 30 it had raised £2.5 million, before expenses to advance studies in its Darwin gas condensate discovery.

The proceeds of the fundraising will be used to fund the Company's Licence fees, Discovery Area fees, technical and commercial studies, general & administrative expenses and, more generally, to advance the Company's Darwin project towards appraisal, the company said at the time.

Howard Obee, Chief Executive Officer of Borders & Southern, said on November 30:"This Fundraising will allow us to advance further technical and commercial studies for a potential appraisal and development of Darwin via a conventional FPSO and phased development concept.

"This is a period of elevated world-wide energy prices and increasing global E&P activity and Darwin is a large undeveloped discovery with attractive scoping economics.  We look forward to reporting on the phased development concept as our studies progress."

"We would like to thank existing shareholders and new investors for their support in the fundraising."