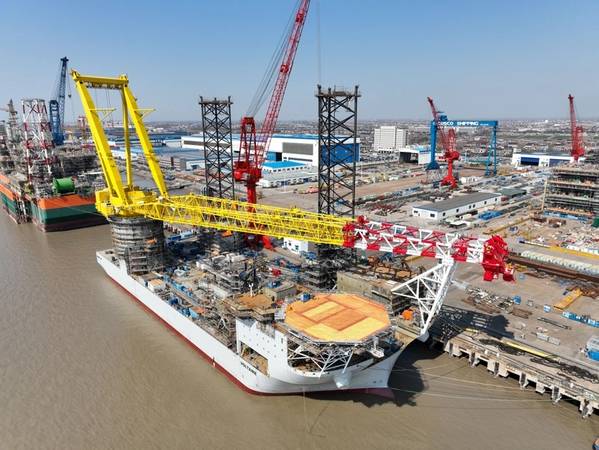 Offshore installation specialist Jan De Nul Group said Thursday that the shipyard in China where its flagship jack-up installation vessel Voltaire is being built, was hit by typhoon Muifa in China during the night of 14 to 15 September 2022.

"The eye of the typhoon passed over the shipyard, causing the vessel to come loose from its moorings. Fortunately, no one was injured. Voltaire is now safely moored back in the shipyard and first sight assessments show limited damage to certain parts of the crane and the helideck. Further assessments are ongoing," Jan De Nul said.

The vessel, being built for offshore wind and decommissioning work, was recently launched at the COSCO Shipping Shipyard in Nantong, China.

Jan De Nul said in March that the Voltaire had been fitted with what it said was the world's largest leg encircling crane.

The Voltaire has been designed to install the offshore wind turbines of the future, with turbines over 270 meters high and blades 120 meters long.

For these lifting works, the vessel was equipped with a main crane of more than 3,000 tonnes.

The delivery had been scheduled for the "second half of 2022." Offshore Engineer has reached out to Jan De Nul to see if the typhoon incident would delay the delivery date.

A Jan De Nul spokesperson confirmed the incident had happened but said that "more info can’t be given at this stage."

Reuters reported Wednesday that the Typhoon Muifa landed around 8:30 p.m. local time as a strong typhoon, the second-highest in China's tropical cyclone classification system, with the maximum wind speed near its center reaching 151 km per hour (94 miles per hour), "powerful enough to damage homes, topple trees and down power lines."

The news agency said Thursday that the typhoon had been downgraded to a strong tropical storm but that it would bring heavy rains and flash flooding across several provinces as it moved north across populated coastal provinces.