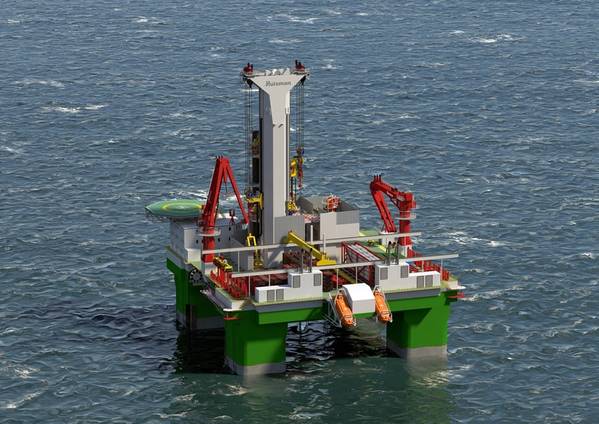 According to Huisman, with its robotic drilling system, the rig would require 40% less people on board, and have 25% lower cost per well compared to conventional solutions. Huisman said that the rig could have up to 86% less emissions per well, too.

Huisman said the rig was aimed at "making the extraction of fossil fuels as sustainable as possible while we make the transition to renewable energy."

"Huisman is working towards the energy transition, developing numerous solutions for the harvesting of renewable energy. This includes those for offshore and onshore wind as well as geothermal energy. However, to ensure energy security during the transition, the company continues to develop increasingly sustainable solutions for conventional energy production. This approach is being given additional stimulus by current geopolitical situations, which threaten the traditional supply lines of energy," Huisman said.

"To ensure reliable access to energy at this time, Europe is being forced to consider a range of alternative sources. This includes the potential of making wider use of North Sea gas reserves – the ‘local’ offshore production offers the lowest carbon footprint relative to other fossil fuel options such as LNG and coal, while providing energy security," Huisman said.

"Huisman believes, however, that even this carbon footprint can be reduced. It has, therefore developed a Harsh Environment Semi-Submersible Drilling Rig that will lower emissions significantly. The philosophy behind the rig is one of holistic optimal efficiency. As a result, the Harsh Environment Semi-Submersible Drilling Rig offers both significant cost and emissions reduction," Huisman said of its rig design.

According to Huisman, examples of the rig’s efficiency include a low drag electrified robotic drilling system that offers consistent speed of operation, as well as a unique heave compensated drilling floor, able to operate in rough seas.

"This results in increased productivity and uptime of the rig. Together with the rig’s sustainability-focused hybrid power system, including energy storage systems storing regenerated energy, this ensures that emissions can be reduced by 30- 40% per well. A 40% reduction of onboard personnel and a large functional deck space contribute to this emission reduction," Huisman said.

Ideally, Huisman said, the rig is powered with onshore-produced hydroelectricity, via a power cable from a nearby platform. Alternatively, it can be powered by two floating wind turbines, moored next to the rig.

"Both radical, but realistic solutions offer extreme low emissions per well. With inclusion of the wind turbines, the reduction in emissions can be increased to as much as 86%," Huisman added.

Dieter Wijning, Huisman Product Manager: “It’s clear that we need an intermediary solution while we make the transition to renewables. And that, if Europe is to have a reliable source of energy for the time being, this is going to involve consumption of oil and gas. We think it’s important that this exploitation of fossil fuel reserves is done as efficiently and cleanly as possible. It is our vision to drive the growth of renewable energy while making fossil fuel extraction more sustainable.”

Jan Atle Andresen Regional Director Huisman Norge: “The increased efficiency offered by the Harsh Environment Semi-Submersible Drilling Rig offers costs savings of 25% per well. The greatest gain here, however, is that the added efficiency also facilitates a significant reduction in emissions – up to 86% per well.” Features & benefits of the Huisman Harsh Environment Semi-Submersible Drilling Rig: ▪