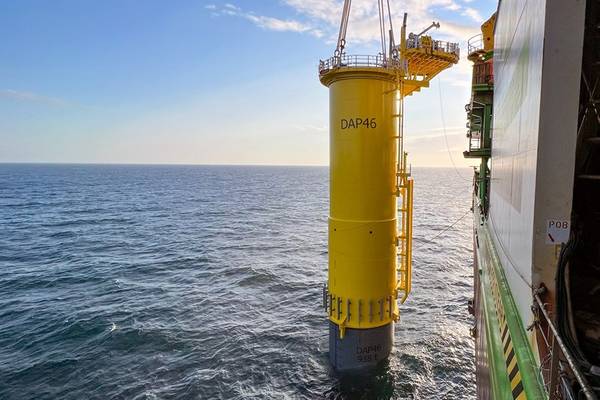 The first monopile and transition piece have been installed at the Dogger Bank Wind Farm in the U.K. North Sea, marking a key milestone for the construction of the world's largest offshore wind farm.

The foundations, designed by Wood Thilsted, are up to 72m in length, weigh on average 1057 tonnes and include the world’s largest 8m offshore wind flange. The design includes the world’s first split-level transition piece for safe installation and operation, with installation works being led by Seaway 7 with support from DEME.

Paul Cooley, director of offshore wind at SSE Renewables, one of the joint venture (JV) companies involved in Dogger Bank, said, "This is a really important milestone for the project as it marks the commencement of our campaign to install 277 turbine foundations across the three phases of what will be the world’s largest offshore wind farm."

Dogger Bank Wind Farm, a JV between SSE Renewables (40%), Equinor (40%) and Eni Plenitude (20%), is made up of three offshore wind farm sites more than 130km off the North East coast of England. When operational the wind farm will generate 3.6GW of energy.

SSE Renewables is lead operator for the development and construction of Dogger Bank, while Equinor will be lead operator of the wind farm on completion for its expected operational life of around 35 years.

"As lead operator during the construction phase of Dogger Bank Wind Farm, we’re working with our development and supply chain partners to install some of the world’s largest turbine foundations on this world-class project," Cooley said.

"During this campaign we’re using foundations that are U.K.-designed and with components made from U.K.-manufactured steel, all of which are helping to support U.K. jobs and a fair and just transition to net zero."

Steel manufactured by Tata Steel in Wales and processed in Corby and Hartlepool is being used in the supporting components of the transition pieces, while South Tyneside-based Metec and Rochdale-based Granada Material Handling have also won contracts with Smulders to support the project.

The foundations have been optimized to tackle challenging wave loads in the Dogger Bank area of the North Sea, with installation in water depths of up to 32m and at a distance of 130km from shore and provide a solid and stable base for the scale of the GE Renewable Energy’s Haliade-X turbines, which are scheduled to be installed onto each of the turbine foundations starting from Spring 2023. Each turbine has a power output of up to 14MW.

lastair Muir Wood, CEO of Wood Thilsted, said, “Wood Thilsted is proud to be a part of making Dogger Bank Wind Farm a success. Our team faced challenges including working with the largest turbine at the time, an innovative dynamic positioning installation vessel, and some very significant wave loads.

“What made success possible was the collaborative working relationship shared with the Dogger Bank team and the other key stakeholders. This project is a model of success for current and future projects.” 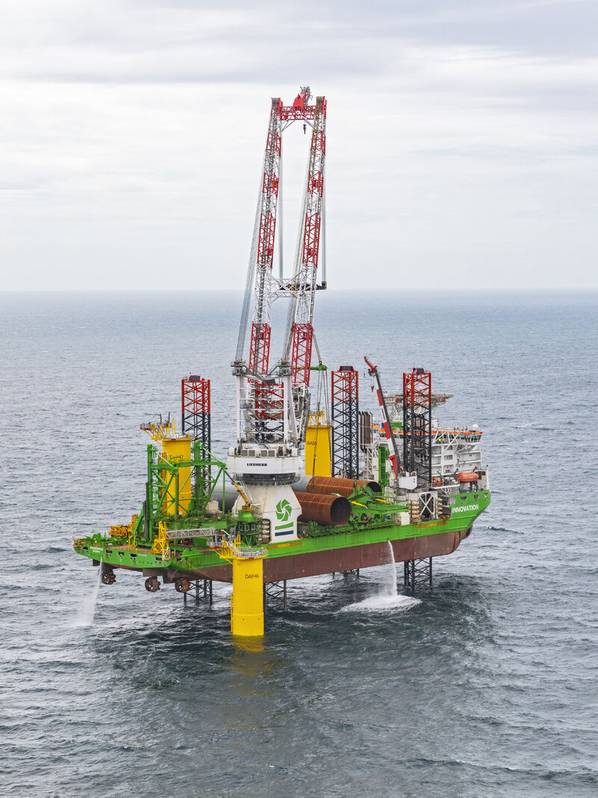 Over the three-year installation program for the three phases of Dogger Bank, a total of 277 monopiles and transition pieces will be loaded onto installation vessels in Rotterdam ahead of transfer out to the offshore wind farm site. Using dynamic positioning technology, the vessels will pinpoint the installation site in the seabed at which point a monopile measuring up to 72m will be upended and transferred to a pile gripper, before being lowered into the seabed.

A hammer will be used to drive the monopile to the design depth in the seabed before a guidance system aligns the installation of the record-breaking 8-meter flanges, which act as a connection for the transition piece which is then installed onto the monopile. The foundations require 152 giant M80 bolts to secure them before a cover is inserted onto the top of the transition piece to leave it watertight.

Lucien Romagnoli, renewables business unit director at DEME Offshore, said, “These unique foundations are huge but also, they are technically complex. This is an important moment for the offshore wind industry and the energy transition.”