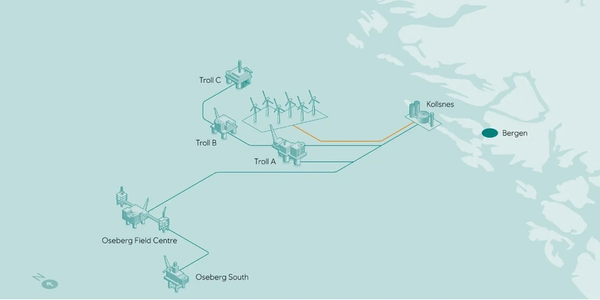 Five oil and gas companies in Norway, partners in the Troll and Oseberg fields in the North Sea, are looking to build a 1GW floating wind farm in the Troll area, with the plan to use the wind farm to power oil and gas installations. The final investment decision could be made in 2023.

The project, called Trollvind, is being worked on by Equinor and its partners and its partners Petoro, TotalEnergies, Shell and ConocoPhillips. The wind farm would be located in some 65 kilometres west of Bergen, Norway.

"With an installed capacity of about ~1 GW and an annual production of ~4.3 TWh, with a startup in 2027, Trollvind could provide much of the electricity needed to run the offshore fields Troll and Oseberg through an onshore connection point. The Bergen area already serves several of these installations with power – and needs more input to its electricity grid. The plan is that the partnership will buy as much energy as the wind farm can produce at a price that can make the project possible," Equinor said.

"Power from Trollvind could make a solid contribution towards electrification of oil and gas installations, accelerate offshore wind development in Norway, and deliver extra power to the Bergen region," Equinor said.

Equinor’s chief executive, Anders Opedal said: "By producing oil and gas with low greenhouse gas emissions, we reinforce the competitiveness of the Norwegian shelf, maintain activity in the industry and safeguard future value creation. Trollvind is a concept where renewable energy works to facilitate several objectives; helping cut emissions through electrification, delivering power to an area where shortages have already created challenges for new industrial development, and Norway maintains its position as a leader in the industrialisation of floating offshore wind. 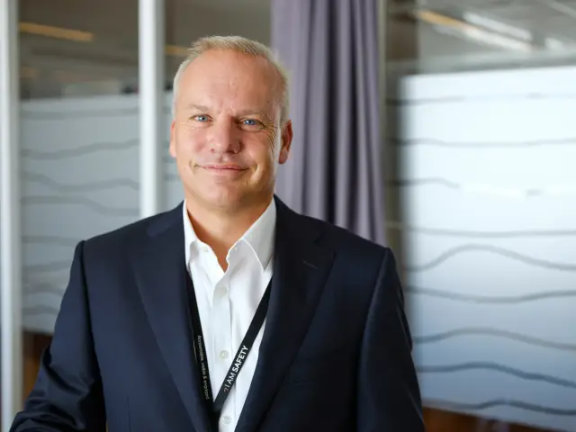 "A full-scale floating offshore wind farm like Trollvind could boost momentum towards realising the Norwegian authorities’ ambition to position Norway as an offshore wind nation, building on expertise from the oil and gas industry,” says Opedal.

Equinor further noted that in 2020, the Norwegian parliament decided to intensify emission reductions requirements from the Norwegian continental shelf from 40 to 50 per cent by 2030.

"To achieve this target, large-scale industrial single-point emission sources, such as offshore oil and gas installations, must reduce their emissions. Electrification of installations with long remaining lifetimes will be a key initiative to succeed with this transition," Equinor said.

“This initiative provides the supplier industry with predictability and an offshore wind portfolio to work with in the years ahead,” Opedal adds.

"Trollvind can be realised by building on the good collaboration established between government authorities and the industry through Hywind Tampen. Experience can be transferred and learning utilised while at the same time identifying and implementing good co-existence solutions from an early stage," Equinor said.

Also, Equinor said that by transferring offshore wind power to shore this may enable the possibility to build a larger wind farm than one directly connected to oil and gas installations offshore.

"Increasing the size of wind farms is a key factor in industrialising floating offshore wind and reducing costs. Bringing the power to shore also promotes more efficient power utilisation through better interaction with regulated hydropower and onshore industry. Increased access to power in this area also means improved security of supply for the oil and gas installations," Equinor.

"The partners are evaluating commercial arrangements where the Trollvind development are selling power to the Troll and Oseberg installations and the Kollsnes plant. Trollvind will not require other forms of financial support. Estimates indicate that Trollvind can deliver power for less than NOK 1/kWh. Such an agreement would ensure greater long-term access to power at a stable price in an area where the power situation is strained. At the same time secure a sufficient income level for the wind farm to trigger the investment," Equinor said.

Trollvind is now being further matured by the Troll and Oseberg partners initiating feasibility studies aimed at an investment decision during 2023, the company added.