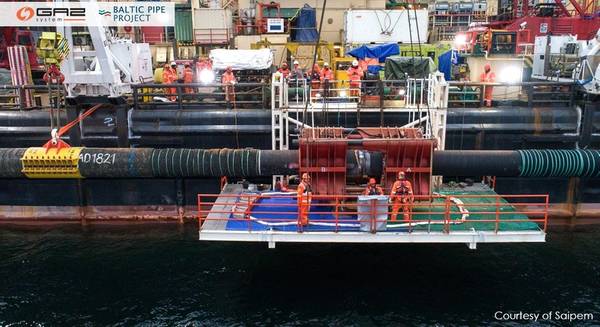 Work on the Baltic Pipe project in the North Sea has been completed, and the pipeline is ready to ship Norwegian gas to Denmark, info on the project's website shows.

Baltic Pipe is a strategic EU infrastructure project led by Danish and Polish companies to build a gas pipeline from the Norwegian part of the North Sea to Denmark and through the Baltic Sea to Poland.

According to the press release issued Thursday, the extensive construction work in the North Sea has been completed, and last weekend the last valve from the Norwegian gas pipeline Europipe II was opened. This means that gas can flow through the more than 120 km new gas pipeline, connected to Europipe II and routed all the way to the receiving terminal in western Jutland in Denmark.

"It’s a huge milestone for the Baltic Pipe project. Gas commissioning proceeded as planned. We have kept the time schedule and lived up to the quality requirements, but we have also spent 18 months preparing for this commissioning,” says Mark Christian Degn Eskesen, Engineering & Asset Manager - Offshore Pipelines at Energinet, Danish national transmission system operator.

As Energinet’s technical manager for the part of Baltic Pipe that comprises the connection to the Norwegian gas pipeline and the construction of the gas pipeline in the North Sea, he has spent many weeks at sea in recent months, the statement reads.

The visible part of the North Sea work began when the gas pipeline was drilled through the dunes at Houstrup Beach on the west coast of Jutland in 2020. By the end of 2021, 105 km of gas pipes had been laid on the bottom of the North Sea, leading to the Norwegian gas pipeline. 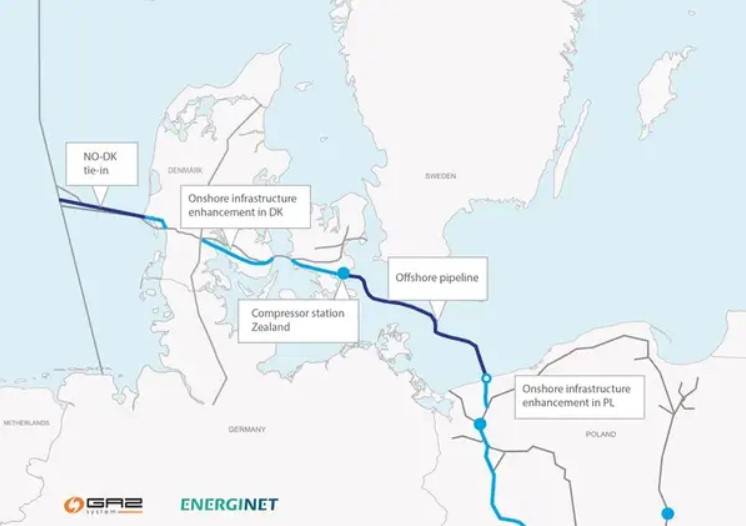 Shortly before Christmas 2021, the PLEM structure (Pipeline End Manifold) was placed on the seabed. It connects the Norwegian gas pipeline to the new Baltic Pipe.

PLEM weighs 215 tonnes and is about the size of a large single-family house. When the PLEM was placed at the bottom, the connection pieces were measured and manufactured in Norway so that they could be installed earlier this year.

In the commissioning phase, gas was first sent through the new pipeline from Denmark to the Norwegian gas pipeline. The valves were then opened so gas could flow from Europipe II to Denmark. In recent weeks, gas pressure has been gradually increased to 130 bar.

Still a few months before consumers can benefit

"The entire operation has gone well, but there are always challenges in such a large project. We had to ensure that the necessary ships could be present at sea at specific times, and we have been facing some technical challenges due to last-minute design changes. Most of the time weather has been favorable, but sometimes we had 5-6-meter-high waves. As we have been working at relatively shallow water – 40 meters depth – waves affect the seabed quite a lot, so the visibility has been limited at times and down to approximately 30-50 centimeters, which makes the work demanding,” says Mark Christian Degn Eskesen.

According to the press statement, the fact that the gas can now come ashore from the North Sea is a huge step forward for the project.

However, it will still be a few months before consumers can benefit from the Norwegian gas. The expansion of the receiving terminal in western Jutland must be completed, just as other parts of the project in Denmark will also be completed during the summer. Baltic Pipe is scheduled for partial commissioning in October 2022 and full commissioning on January 1, 2023.

As for the Baltic Sea part of the pipeline, on November 18, 2021, the last weld on the gas pipeline connecting the coasts of Denmark and Poland was made.

The capacity of Baltic Pipe will amount to 10 billion cubic meters per year, which is comparable to the volume of gas received by Poland under the long-term contract with Russian Gazprom, which expires in December 2022, Polish operator Gaz System said in November 2021.

GAZ-SYSTEM also plans to build an FSRU Terminal in the Gulf of Gdansk, a project which it says would significantly contribute to the planned decoupling of the EU from gas supplies from Russia.