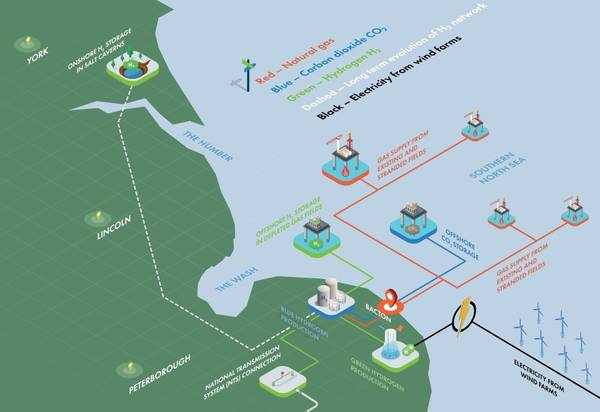 Credit: Bacton Catchment Area development concept. For the purposes of this study the Bacton Catchment Area is defined as the geographic area covering the Southern North Sea, specifically the fields whose pipelines make landfall at Bacton or which could use pipelines making landfall at Bacton, and the adjacent onshore areas where hydrogen from Bacton might be used or stored. Credit: OGA (now NSTA)

McDermott International has said it has joined a group of industry experts focused on unlocking the potential for a hydrogen-led energy hub located at Bacton, Norfolk, UK.

The UK North Sea Transition Authority (NSTA), previously known as the Oil and Gas Authority, is leading the Bacton Energy Hub (BEH) project, which has been described as an important factor in the UK's energy future and its push to reach net-zero emissions.

The project aims to deliver a sustainable hydrogen supply by adding facilities that support low-carbon hydrogen production, carbon capture and underground storage (CCUS) by 2030. Also, through the development of offshore wind, it is aiming to develop renewable hydrogen production as part of the energy supply transition by 2050.

The NSTA has established five Special Interest Groups (SIGs) to work collectively on an executable development concept. The five SIGs are Hydrogen Supply; Hydrogen Demand; Regulatory; Supply Chain and Technology; and Infrastructure. McDermott has been selected as a core member of the Infrastructure SIG and has been chosen to lead Work Scope 6—Greenfield Onshore facilities.

The Infrastructure SIG will establish the offshore and onshore facilities required to produce, store and distribute both low-carbon and renewable hydrogen, with associated CCUS. The SIG will include industry and government input to perform a series of studies and make recommendations for future project development.

"We are proud to play a leading role in developing the UK's energy future in line with the net-zero objectives set by the UK Government," said Tareq Kawash, Senior Vice President, Onshore. "McDermott's Center of Excellence in London has the design capabilities and expertise in major project execution, including both greenfield and brownfield, to deliver a viable project scope that will support Maximizing Energy Recovery (MER) and net zero emissions for the UK."

"It's great to see an organization like McDermott contributing to the Bacton Energy Hub initiative, which aims to facilitate the transition to net zero and reinforce the East of England's position as a key region for low carbon power for the UK," said Alistair MacFarlane, NSTA Southern North Sea & East Irish Sea Area Manager. "The Infrastructure SIG will play a vital role in maturing the opportunity at Bacton and hopefully enabling the industry to take investment decisions by 2024."