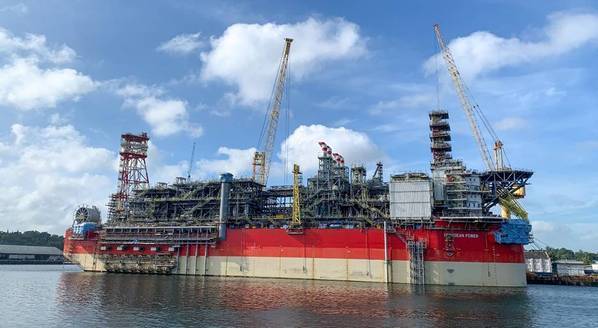 "IEC will now have the right to purchase natural gas from Energean’s fields. The gas price will be determined in each period, with purchased amounts determined on a daily basis," Energean said.

Starting upon the first gas production from Karish, via the Energean Power FPSO currently being built in Singapore, the agreement will be valid for an initial one-year period with an option to extend subject to ratification by both parties. First gas is expected in the third quarter of 2022.

"This is the first agreement of its kind for Energean and represents a significant step in the development of the company’s position in the Israeli gas market. The agreement will optimize Energean’s gas sales portfolio and ensure full utilization of its FPSO capacity," Energean said.

IEC CEO Ofer Bloch said: "IEC continues to aim to diversify its gas procurement sources while seeking and finding the lowest and most competitive prices for the benefit of the public."

Energean CEO Mathios Rigas added, "We are pleased to have contracted with IEC - the largest natural gas consumer in Israel. This is another sign in Energean’s involvement within Israeli’s energy economy. Alongside first gas production from Karish, expected in Q3 2022, we will continue to expand the natural gas reserves of Israel and the Eastern Mediterranean. Our operations benefit Israel and Israelis in multiple ways, providing both energy security and a new level of market competition; avoiding the potential downside of monopoly supply.”

Energean earlier this month announced the connection of the Karish offshore gas field to the Israel National Gas Line (“INGL”), "an important milestone in facilitating the operational readiness of the Karish field development."

"Once onstream, the field will produce and provide significant quantities of natural gas to Israel and eventually the wider Eastern Mediterranean region," Energean said at the time.

The connection between Energean’s land-based system at Dor Beach in Northern Israel and the INGL delivery system was completed by welding together two 30-inch diameter pipe sections. Gas from the Karish field will flow to the Energean Power FPSO, which will, upon arrival from Singapore, be located 90 km offshore where production output will be processed and separated.

The treated gas will then be delivered from an underwater pipeline to the land-based system at the Dor Station before entering the national pipeline on its way to distribution companies and end consumers.