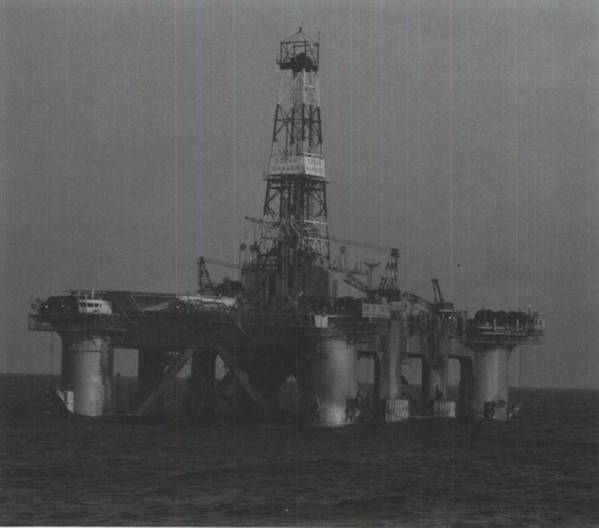 The Ocean Ranger, on the Hibernia J-34 well off Eastern Canada during December 1981, is shown at the 80-foot drilling draft. Some of the twelve anchor cables are visible running from the fairleads on the corner columns - Credit: Government of Canada

Today marks 40 years since 84 men lost their lives when the semi-submersible mobile offshore drilling unit “Ocean Ranger” sank in what was one of the worst offshore accidents in Canadian history.

The Ocean Ranger was drilling an exploration well on the Grand Banks of Newfoundland for Mobil Oil of Canada, Ltd with 84 crew members on board when it sank. There were no survivors.

"Following the tragedy, a Royal Commission was established to conduct an inquiry into the Ocean Ranger disaster. The inquiry determined that the loss of life and sinking of the Ocean Ranger was caused by a chain of events, which resulted from human error, design inadequacies, and deficiencies within the management system, coincident with severe storm conditions.

The Royal Commission made 136 recommendations governing numerous aspects of training and competency, safety equipment, design and stability of the drilling unit, improvements to regulatory oversight and improvements to search and rescue. Following the issuance of the report, the Atlantic Accord Implementation Acts and associated regulations were issued and in 1986, the Canada-Newfoundland and Labrador Offshore Petroleum Board was created for the purposes of regulating the oil and gas industry offshore Newfoundland and Labrador," info on C-NLOPB's website shows.

Reflecting on the 40th anniversary of the deadly event,  C-NLOPB said:" Lessons learned from this tragedy are a part of the fabric and culture of the Canada-Newfoundland and Labrador Offshore Petroleum Board (C-NLOPB). The C-NLOPB encourages everyone to set aside some time to reflect on this tragedy, remembering those lost and their families."

"The workers on the Ocean Ranger and their loved ones are always on the minds of staff and Board members of the C-NLOPB. Through collective vigilance, transparency, and continuous improvement, we are committed to keeping offshore worker safety top of mind, each and every day,” said Paul Alexander, Chief Safety Officer

“The Ocean Ranger tragedy serves as a constant reminder of why safety is paramount in all decisions made at the C-NLOPB. We will continue to work with operators, offshore workers, governments and our regulatory colleagues in Canada and around the world to ensure there continues to be a strong safety culture in all of our offshore operations,” said Jill Mackey, Director of Safety

“The pain of the Ocean Ranger is still felt deeply among Newfoundlanders and Labradorians and other Canadians. We remember the 84 lives lost and send our thoughts to their families and friends. In remembering the past and those who lost their lives, we renew our commitment to continue to work diligently for a safe offshore industry,” said Scott Tessier, Chief Executive Officer, C-NLOPB

In a separate statement, Charlene Johnson, CEO of The Newfoundland and Labrador Oil and Gas Industries Association (NOIA) said:"We remember the 84 men who lost their lives, as well as the family members and friends who lost loved ones on that tragic day. While we cannot change what happened that day, we can ensure we keep alive the memories of those 84 men who lost their lives and the people who love them and are forever impacted. It is our responsibility to learn from tragedies like the sinking of the Ocean Ranger and continually strive for innovation in safety practices, in honor of those men and everyone else who works offshore in our harsh environment.”

In commemoration of the 40th anniversary of the Ocean Ranger tragedy, Noia is supporting the Ocean Ranger Memorial Fund for initiatives such as the creation of a new scholarship and a memorial outdoor classroom.

Due to COVID-19, the 40th anniversary memorial service will be held virtually for members of the public. The service will start at 10:45 a.m. local time on February 15 and can be viewed here: https://tom0349.wixsite.com/streamingservices/oceanranger