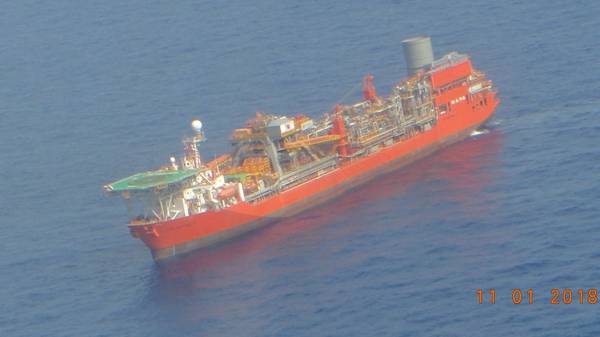 Brazilian oil company Enauta has completed repairs of a production line of the FPSO Petrojarl I FPSO at the Atlanta heavy crude oil field in Brazil, following last week's preventive shutdown of production, however, the company informed on Thursday of a COVID-10 outbreak aboard the floater.

Enauta had informed of the production halt on January 13, citing the need for inspection and repair of a production line of the FPSO.

The company at the time said  that the initial assessment indicated that the repair should be done „in the short term.“

In an update on Thursday, Enauta said the repair had been completed on January 19, 2022, however, „the occurrence of a COVID-19 outbreak in the unit led to a lockdown and a crew change.“

"The company is following all protocols and taking all measures to keep people healthy and safe; it expects to resume production next week. During this period, the company anticipated maintenance activities that would be carried out in a mandatory stoppage that will take place sometime this year,“ Enauta said.

The company did not say how many people were aboard, nor how many were infected.

As previously reported, Enauta has this week extended the charter of the 1986-built Petrojarl I FPSO. The FPSO achieved first oil at the Atlanta field in 2018, and has been used as an early production system at the field.

Enauta signed contracts with Altera to extend the charter and Operation and Maintenance (O&M) of FPSO Petrojarl I, with the agreements having an additional duration of up to two years, and their expiration extended from May 2023 to May 2025.

"The cost to adapt the unit will be US$30 million. The extension is contingent upon the issue of the DNV (Det Norske Veritas) Certificate before the expiration of the current agreement," Enauta said Wednesday.

Worth noting, Enauta in December also signed a letter of intent with Malaysian FPSO contractor Yinson for the provision, operation, and maintenance of a 'Definite System' FPSO at the Atlanta field for full-field development.

Commenting on the Petrojarl I FPSO Extension yesterday, Carlos Mastrangelo, the Company’s COO said Tuesday: "This new term promotes the operational continuity of the Atlanta Field and may enable the temporary and simultaneous operation of the EPS and the Definitive System, if approved, optimizing the transfer time of FPSO Petrojarl I wells to the new FPSO of the Definitive System.

"Another gain from the extension is the maintenance of Atlanta’s operating cash flow for more than a year, since the interruption of production between the end of the EPS and the startup of the DS may be avoided. In addition, the increase in water treatment capacity will reduce future restrictions of the existing production plant."

Enauta said Wednesday that a 35-day production stoppage was planned so maintenance can be carried out on equipment that needs to be turned off.

"Enauta is working to ensure that these activities are carried out at the same time as the periodic stoppages established by the Ministry of Labor, thus reducing the need for additional downtime," Enauta said.

"The bidding process for the FPSO and other equipment for the DS of Atlanta continues as planned. Enauta is evaluating the proposals received in order to make its Final Investment Decision - FID in the first quarter of 2022 and begin production in the DS in mid-2024," Enauta said.