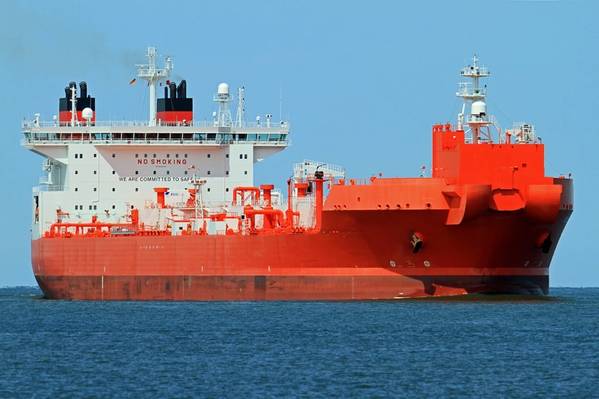 More shuttle tankers will be needed in the years ahead to keep pace with a projected rise in oil volumes needing transport, Rystad Energy said.

Produced volumes requiring transport key shuttle tanker markets Brazil, Canada, Norway, the U.K. and Russia are expected to rise to 3.3 billion barrels per year before the end of the decade, jumping 35% from 2.5 billion in 2021, according to a recent report from the Norwegian analyst group.

Apart from minor dips in total utilization across these countries in 2018 and 2021, shuttle tanker activity has increased year-on-year since 2013 and is set to grow further by a compound annual growth rate (CAGR) of 3.5% between 2021 and 2030.

“There is a need for a new influx of shuttle tankers to meet the increasing demand and replace some of the ageing capacity that will be taken out of service,” said Oddmund Føre, senior vice president of energy service research with Rystad Energy. “Crude oil extraction will continue for many years to come and, given the robust economics and competitiveness of the offshore industry, new investments in offshore production are likely to continue building, ensuring a bright future lies ahead for the shuttle tanker industry.” 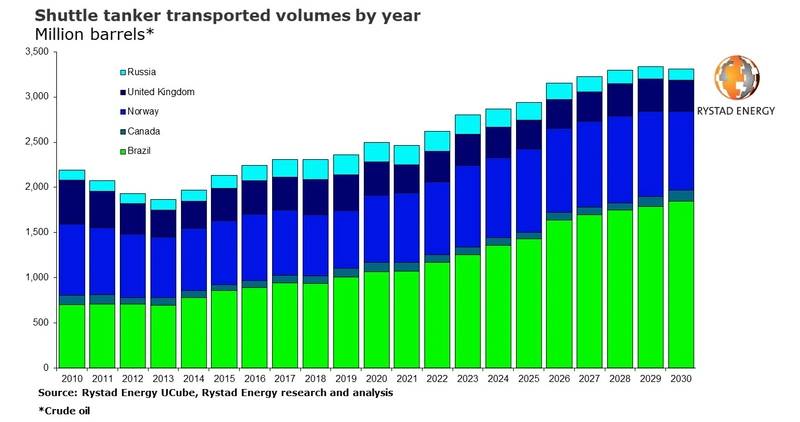 Shuttle tankers, typically used in locations where subsea pipelines are unviable, are crucial for moving liquids from wells to refineries and terminals. The North Sea was once the pioneer region and largest market for shuttle tankers due to its harsh environmental conditions and fragmented field structure, but the concept has been exported to other offshore areas with great success. Brazil is now the largest market for shuttle tankers due to its ultra-deep-water oilfields and will account for more than half the shuttle market demand from 2026.

The surge in offshore production in Brazil has seen a significant rise in the utilization of shuttle tankers, with activity soaring by 55% from 695 million barrels for 2013 to 1.07 billion in 2021, according to Rystad, which forecasts a further 72% increase by the end of 2030 when total volumes handled by shuttle tankers in the country will hit 1.84 billion barrels.

Tracking the vessels
With nearly 100 vessels now in operation and a handful on order, the shuttle tanker market remains one of the smallest and most surveyable shipping market segments. Despite its small size, there are significant variations and differences across regional shuttle tanker markets. The North Sea and the Norwegian side of the Barents Sea have around 25 shuttle tankers in operation and comprise 25% of the global market. Although the North Sea market provides more diversification than other markets, Equinor and state-owned Petoro are responsible for over 35% of the volumes shuttled off oilfields.

The high standards and operational knowledge in the North Sea have helped other regions adopt the same infrastructure. Brazil is now the largest market with 40 vessels and three times the production of the North Sea. Unlike in the North Sea, however, Brazilian field operators have developed their form of regulation without authorities playing an active role. Knutsen NYK Offshore Tankers (KNOT) and Altera Infrastructure are two of the main shuttle tanker owners operating in Brazil with decades of experience operating vessels in the North Sea, helping create continuity and efficient operations in Brazil’s deep waters. The Brazilian market is less diversified, with Petrobras handling 70% of offshore shuttle tanker production with vessels that are either chartered by the Brazilian state giant itself or international operators. While international companies must leave Brazil every 90th day to meet local content regulations, Petrobras can operate more efficiently with significantly more trips per vessel than its in
ternational competitors.

In Russia, the shuttle tanker market is the same size as the North Sea but is divided into the Arctic Russia and Far East Russia markets. The former is focused on shuttling from Arctic oilfields to Murmansk, with the latter shuttling crude and condensate from the Sakhalin fields to the Asian market. Due to the relatively light-weight class of Russian shuttle tankers and the fact that they are ice-classed, there tends to be a higher vessel intensity per barrel produced in the region than in other markets.

Looking ahead
Rystad expects the North Sea will be a crucial driver for increased activity as a new investment spree follows the Norwegian government’s tax regime, introduced in mid-2020, which is aimed at incentivizing sanctioning activity to be filed by the end of 2022. Brazil has also been vocal about its ambitions to become more energy independent, with many wells to be drilled by 2030. In addition, Rystad noted a growing number of international players are entering the stage in Brazil with their stake in crude oil production. This trend alone will drive shuttle tanker demand upward as the vessel intensity per barrel produced is higher than local leader Petrobras.