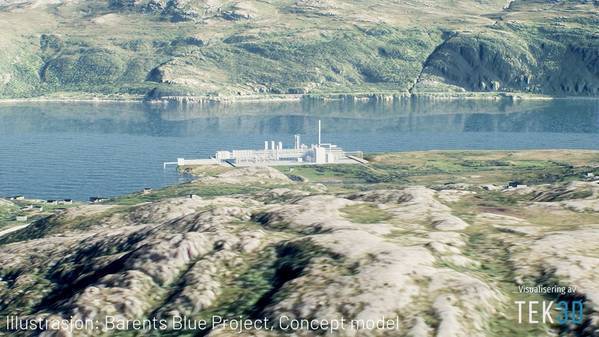 Horisont Energi, a Norwegian company developing a blue ammonia project in Norway that involves offshore carbon storage, has signed a four-year framework deal with logistics and supply company ASCO Norge, with an option to extend it.

Horisont Energi has said it will build Europe’s first large-scale factory for the production of so-called “clean” ammonia from natural gas and renewable energy, meaning that CO2 is captured during the production process and stored permanently in a sandstone reservoir under the seabed.

The reservoir, called Polaris, is located under the seabed off the coast of Finnmark in Northern Norway. An investment decision is expected for the Barents Blue project around the end of 2022. Horisont Energi has recently signed agreements with Vår Energi and Equinor for the supply of gas to the Barents Blue ammonia plant.

"Ammonia has a number of industrial uses, including within fertilizer production, and is currently the world’s second most used industrial gas, with an established infrastructure for shipping the product around the globe. In the future, ammonia is also expected be utilized as a climate-neutral fuel, especially in the maritime industry and for climate-neutral power production," Horisont Energi said.

“Through the Barents Blue project, Horisont Energi and project partners are in the process of creating a new global production region for clean ammonia on a par with the largest ammonia production regions in the world. Ammonia is one of the world’s most important industrial gases, and clean ammonia will therefore play an important role in the green transition and in the low-carbon society.”
Bjørgulf Haukelidsæter Eidesen, CEO of Horisont Energi.

ASCO has assisted Horisont Energi in the process of choosing a site for the onshore facility and has offered valuable support in Finnmark and made important contributions during the process that led to Markoppneset in Hammerfest municipality as the preferred site for the company’s planned plant for production of clean ammonia, the company said.

“This is a very important contract for us. It confirms ASCO’s dedication to sustainable solutions and demonstrates our commitment to positive contributions to the green transition through optimal logistics solutions," said Runar Hatletvedt, CEO of ASCO Norge AS.

ASCO’s role will be to provide logistics and supply services within marine services, base and port services, materials management and control, transport and customs clearance, waste management, delivery of carriers and associated equipment, as well as other logistics-related services.