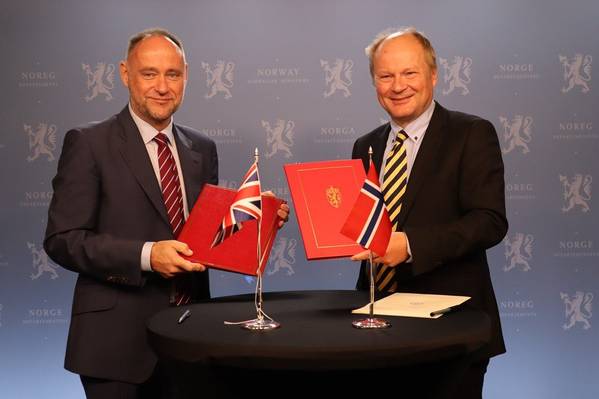 Britain and Norway on Thursday signed a bilateral treaty on electricity interconnection to help formalize power trading between the two countries, Britain's ministry for business and energy (BEIS) said.

The agreement comes ahead of the start of commercial testing operations in October of the North Sea Link, the first electricity interconnector between the two countries.

"Today's agreement ensures that the full benefits of the North Sea Link interconnector are realized by ensuring that the trading arrangements over North Sea Link are market-based and transparent and that the maximum securable level of capacity of the interconnector is made available for use," BEIS said in a statement.

The BEIS said the North Sea Link would help reduce wholesale electricity prices, and cited an estimate from regulator Ofgem which said savings for customers' annual energy bills could total 3.5 billion pounds ($4.84 billion) over the next 25 years.

The 1,400 megawatt (MW) cable's start-up comes as electricity prices in both countries are at multi-year highs, albeit UK prices at a steep premium, suggesting the cable will initially export power from Norway to Britain. read more

Britain aims to benefit from Norway's vast hydropower resources to help balance intermittent wind power, while Norway can import cheap surplus renewable energy to save water in its hydropower reservoirs.

Thursday's agreement does not contain any obligation to carry out any projects and can be terminated with 12 months' notice, Norway's oil and energy ministry said in a separate statement.