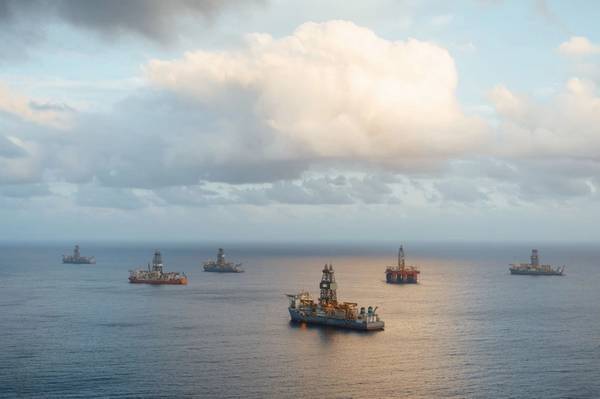 Offshore drilling company Transocean has reached a deal with Singapore-based Jurong Shipyard - a Sembcorp Marine subsidiary - to delay the delivery of the ultra-deepwater drillships Deepwater Atlas and Deepwater Titan, originally ordered in 2014. As part of the agreement, Jurong Shipyard has agreed to accept deferred payment for both rigs, Transocean said.

The Deepwater Atlas and Deepwater Titan are the world’s first eighth-generation ultra-deepwater drillships and only rigs to feature a 3,000,000 pound hook-load, Transocean said.

According to Transocean, the drillships are the most capable and highest specification rigs in the world and will include the first 20,000 psi well control system.

"In addition to their state-of-the-art drilling capabilities, these rigs are also designed and equipped to optimize fuel consumption, reduce emissions, and thus minimize the associated carbon footprint of each offshore project," Transocean said.

As for the terms of delivery and payment delays, the delivery of Deepwater Atlas, planned to drill at the Shenandoah project in the Gulf of Mexico, is now expected to be in December 2021.

Upon delivery, Transocean will pay $50 million to Jurong Shipyard, and the balance of payments owed to the shipyard, around $370 million, will be payable during a five-year period following delivery pursuant to a secured financing arrangement with the shipyard.

Transocean also has agreed with oil firm Beacon that drilling operations on the Shenandoah project in the U.S. Gulf of Mexico are expected to start during the third quarter of 2022.

Transocean expects Beacon to start drilling on its Shenandoah project using the Deepwater Atlas following a final investment decision from Beacon and its partners. That decision is expected to be made on or before July 31, 2021, Transocean said.

The other drillship, the Deepwater Titan, is now slated for delivery in May 2022. Upon delivery, Transocean will pay Jurong Shipyard 80% of the amounts owed, or around $350 million. Twenty percent (20%) of amounts owed, or approximately $90 million will be deferred and payable over a five-year period following delivery pursuant to a deferred payment arrangement with the shipyard.

"Payments under each arrangement will be made in accordance with the respective payment schedules over the terms of each arrangement. Principal balances will carry an interest rate of 4.5% per annum," the drilling company said.

Jeremy Thigpen, President and CEO of Transocean said:"These agreements clearly represent a monumental achievement for Transocean. As the result, we will take delivery of the two highest specification ultra-deepwater drillships in the world, and the only two assets capable of drilling and completing 20,000 psi wells.

"Notably, as a critical element of these agreements, we will receive shipyard financing, which materially improves our year-end 2022 liquidity by over $450 million, thus extending our runway and providing us with additional investment flexibility as the industry recovers.

Thigpen added: “On behalf of Transocean, I sincerely thank Jurong Shipyard, Chevron, and Beacon Offshore for their significant contributions to this process. I would especially like to thank our customers, as these agreements clearly demonstrate the trust that they have in Transocean’s track record of successfully introducing revolutionary new technologies to the industry, and the confidence that they have in our ability to consistently deliver safe, reliable and efficient drilling operations across our global fleet.

Transocean first ordered the two drillships on speculation from's Jurong Shipyard in 2014 for a price of $540 million each, and for delivery in 2017 and 2018, but the delivery dates have been put off several times.

The company last year said it expected the two ultra-deepwater drillships would cost it $2,25 billion in total, more than a double on the original order price.