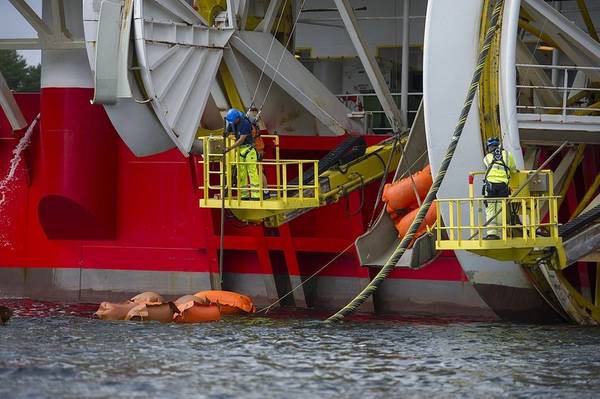 Germany and Norway officially opened NordLink on Thursday, a direct power cable between the two countries that will provide Europe's largest economy with green energy at a time it is phasing out polluting coal power.

Norway's electricity production is almost exclusively hydropower-based and its large reservoirs mean it can control its renewable energy generation and also help plug shortfalls in Germany's intermittent supply from wind and solar plants.

The cable will help turn Norway, which is also Western Europe's largest oil and gas exporter, into a green energy hub for the region, the new head of state-owned transmission system operator (TSO) Statnett told Reuters.

"NordLink is not just a bilateral German-Norwegian project but we are also setting a milestone for a modern energy supply in all of Europe," German Chancellor Angela Merkel said.

Norway is already connected to the Netherlands via the 700 megawatt (MW) subsea interconnector NordNed and to Denmark through the Skagerrak connection, which consists of four cables with a capacity of 1,700 MW.

"That we now have these interconnectors makes us a renewable hub in Europe and also allows us to take the next step into offshore wind," Statnett Chief Executive Hilde Tonne told Reuters in an interview.

Norway exported a net 20.5 terawatt-hours (TWh) of electricity in 2020. That's equivalent to 15% of the power Germany produced from lignite and hard coal last year, based on data from German energy lobby group BDEW.

Norway is also preparing to build offshore wind farms in the North Sea, with the first licences expected to be awarded this year. Some of the farms could be linked to Norway as well as the rest of Europe.

"(NordLink) will contribute to a more efficient use of power resources and lay the foundations for further investments in renewable production," Norwegian Prime Minister Erna Solberg said.

Critics say foreign cables could push up Norwegian power prices, however, and long-standing plans for a link to Scotland have been postponed indefinitely amid political opposition.

The 1.8 billion euro ($2.2 billion) NordLink cable is owned by Statnett and German grid company Tennet as well as German state-owned bank KfW. It has been in commercial operation since the end of March, following a four-month trial.

At 623 km (387 miles), it is the world's longest subsea electrical interconnector and has a capacity of 1,400 MW, enough to power 3.6 million German households with renewable energy.

At times of high winds, wholesale power prices are very low, and sometimes even negative, meaning buyers are being paid to take surplus renewable electricity.

Norway is expecting to import power from Germany when prices are low and export electricity when wind and solar generation drops off and pushes up the cost of power.

However, grid bottlenecks within Germany will limit the cable's use until 2026.

This year, NordLink is only guaranteeing that Norway will be able to use 11.7% of the cable's capacity to export to Germany, though in practice the available capacity often exceeds this. By 2026, the minimum capacity is set to reach 70%.