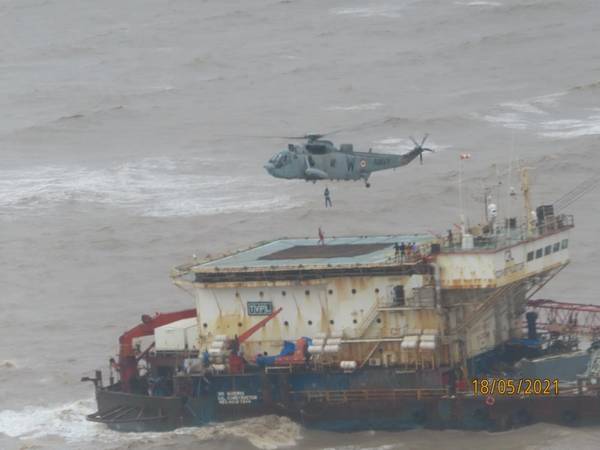 Fourteen people have died as a barge sank off India's west coast after a powerful cyclone barrelled into the country, authorities said on Wednesday, while Indian navy ships and aircraft scoured waters to locate scores of other missing personnel.

"We can confirm that 14 bodies have been recovered from the rescue operation of barge P305" that sank off the coast of Mumbai, Mehul Karnik, chief public relations officer, Western Naval Command told Reuters.

Indian navy ships and aircraft have been scouring the waters off the country's financial capital since Monday when the "P305" and some other vessels went adrift due to the cyclone.

Driving waves of up to 25 feet on the high seas, cyclone Tauktae rammed into the western states of Maharashtra, of which Mumbai is the capital, and Gujarat over the past two days, killing at least 61 people and leaving a trail of destruction, authorities said.

The storm smashed into the Bombay High oilfield near Mumbai, where India's biggest offshore oil rigs are located, and sank the "P305" barge that had 261 personnel on board.

The navy said over 180 people had been rescued from the barge, which was engaged in contract work awarded by Oil and Natural Gas Corp, India's top exploration company.

Three ships and aircraft are continuing to look for the remaining personnel, it added.

Prime Minister Narendra Modi is scheduled to conduct an aerial survey of the storm-hit areas in his home state Gujarat later in the day, the state government said.

Cyclone Tauktae made landfall in Gujarat late on Monday packing gusts of up to 210 kph (130 mph).

It has piled pressure on Indian authorities as they grapple with a massive spike in COVID-19 infections and deaths as well as a shortage of beds and oxygen in hospitals.

In Gujarat, among the hardest-hit states by the second wave of the virus, the cyclone has ripped out power pylons, damaged some 16,500 homes and blocked over 600 roads, authorities said.

The state's farm sector is also likely to have taken a hit, including the major mango growing belt of Saurashtra.

Officials said work to restore electricity supply and clear roads was ongoing, but some parts were still cut off.

"Mobile phone networks are still down in many areas, and I don't think they will be restored by today," Aayush Oak, the top official in Gujarat's Amreli district, told Reuters.

(Reporting by Nigam Prusty in NEW DELHI and Sumit Khanna in AHMEDABAD and Aishwarya Nair in Mumbai; Writing by Devjyot Ghoshal and Nupur Anand; Editing by Sanjeev Miglani and Himani Sarkar)