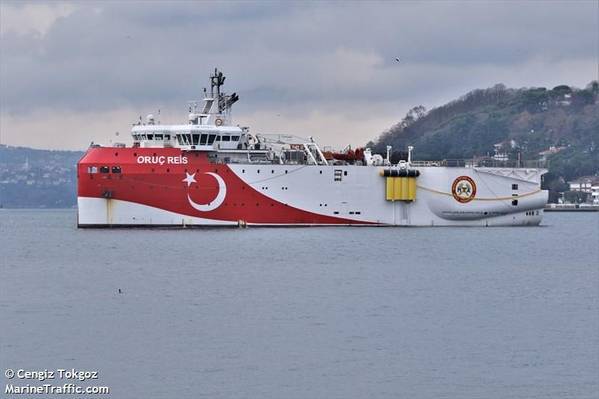 European Council President Charles Michel called on Turkey to keep working to resolve disputes with Greece and Cyprus over gas rights in the Mediterranean as he visited Ankara on Tuesday to discuss trade and refugees with President Tayyip Erdogan.

A row between Turkey and EU members Greece and Cyprus over offshore jurisdiction has strained ties, reaching a peak last summer when Turkish and Greek navy frigates escorted vessels exploring for hydrocarbons in disputed waters.

The European Union backs Athens, while Ankara has accused the bloc of bias and of not honoring its pledges under a 2016 migrant deal.

The visit by Michel and European Commission President Ursula von der Leyen follows an EU summit last month at which the bloc said work could begin on deeper trade ties and on providing more money for refugees in Turkey.

Despite concerns over what some European leaders call recent Turkish backsliding on human rights, the EU has applauded Ankara's recent withdrawal of vessels operating in disputed waters and restarting talks with Greece.

"In Ankara, ready with (von der Leyen) to start discussion with (Erdogan) on the future of EU-Turkey relations," Michel said on Twitter. "Sustained de-escalation is needed to build a more constructive agenda."

The EU last month opened the door to begin updating a Customs Union as demanded by Ankara. This would bring EU candidate Turkey into the internal market of the world's largest trading bloc and allow unhindered flow of goods and services.

Erdogan has downplayed EU membership in recent years and few analysts see it as imminent.

The EU chiefs, who last held in-person talks with Erdogan a year ago, were expected to present Ankara with three options if the maritime de-escalation continues, including improving economic ties, a formula to support the more than 4 million refugees in Turkey, and ways to increase contacts.

"We are no longer in an emergency situation so this is more about working for a longer-term perspective," an EU official said.

At the summit last month, the EU also warned Ankara of sanctions if it restarts energy exploration in disputed waters and voiced concern over Turkey's human rights record.

Michel and Von der Leyen are expected in Ankara to stress that the EU will not approve closer ties without fundamental rights being honoured.

Both the EU and the United States have criticised a move by Turkey to abruptly withdraw from a convention protecting women from violence, as well as a legal case to shut down the third biggest party, the pro-Kurdish Peoples' Democratic Party (HDP).

(Reporting by Tuvan Gumrukcu in Ankara and Gabriela Baczynska in Brussels; Additional reporting by Jonathan Spicer in Istanbul; Editing by Angus MacSwan)