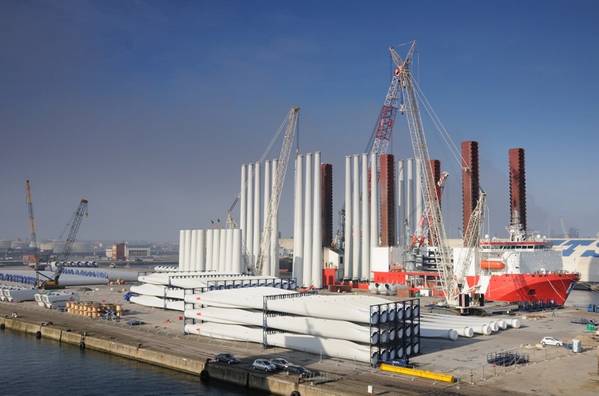 After several false starts, 2021 is the year when the U.S. offshore wind industry begins to realize its potential. This is according to Philip Lewis, Director of Research, World Energy Reports (WER).

In an interview with Maritime Reporter TV's Greg Trauthwein, Lewis, whose WER is set to release an intelligence pack that presents a roadmap to the opportunities in the U.S. offshore wind space, says that at least 30 major offshore wind projects are forecast to be developed within this decade.

"Ports, fabricators, component manufacturers, vessel operators, engineering firms and lenders will benefit from close to $88bn of CAPEX and a $2.8bn annual OPEX opportunity," according to Lewis.

Despite being the 2nd largest global market for onshore wind, the United States is today a minor player in offshore wind in comparison to the European and Asian offshore wind markets. Two operational projects for a total 42MW of installed capacity were installed in the US at the end of 2020 versus a global offshore installed generation base of close to 34GW.

Step-change
However, according to Lewis, 2021 will deliver a step-change in offshore wind activity in the US as the journey accelerates to develop the 27.6GW project pipeline within this decade.

So where is the offshore wind opportunity?

"First thing to say is that the US is home to a large offshore wind potential. In fact, 29 states have commercially feasible wind resource.
In theory, if all the US commercially feasible offshore wind resource were to be developed, it would result in a power generation capacity of double the total US electricity production capacity today," Lewis explained.

The first movers for commercial-scale offshore projects wind will be the northeast and mid-Atlantic states. These regions will account for most of the construction activity within this decade. We are also forecasting a demonstration project in the Great Lakes, Lewis says.

Next to move, Lewis says, will be the Pacific states, where the wind area leasing process could kick-off as early as the end of this year.

"There is a potential that large projects could be bought on stream in the Pacific by the end of this decade at the earliest. But it is more likely that this market will provide good opportunity into the next decade," he says, adding that some Gulf of Mexico and South Atlantic states will begin to advance their offshore wind ambitions within this decade. 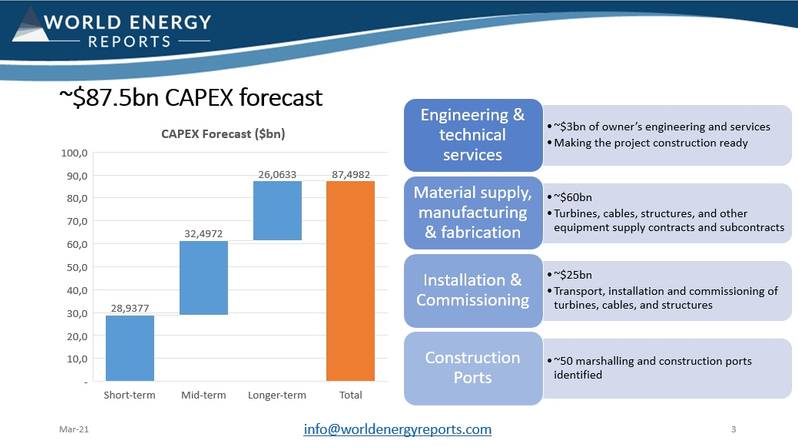 Lewis says developers in the U.S. are moving 30 major projects forward for around 28GW, which represents an $88 billion CAPEX opportunity and an annual recurring OPEX spend of around $2.8bn once these projects are delivered.

So, where will this money be spent, and who will benefit?

"The initial stage is where the developer assesses the site and makes the project construction ready. Apart from engineering and permitting activities, this stage involves a number of survey activities calling on geophysical, geotechnical, metocean survey and offshore logistics vessels. As an example, one of the large short-term projects has chartered in over 20 Jones Act compliant vessels and several foreign-flag vessels to support its survey campaigns," Lewis says.

According to WER, around $60bn will be spent on material supply, manufacturing, and fabrication services, $3 billion on engineering and technical services, while offshore construction and commissioning will account for around $25bn, with Lewis warning that in a few years the U.S. might face a situation where it won't have enough assets to support the planned offshore wind growth.

"We review the opportunities for both Jones Act and foreign flag vessels to support these activities. We see over 20 different vessel types being used in offshore wind project construction. Our analysis indicates tight supply of key assets in the middle part of the decade that can lead to project delays and cost overruns unless new tonnage is made available," Lewis says.

To develop all this capacity will require a large number of suitable marshaling, manufacturing and construction support ports. In our report, we review nearly 50 ports identified for these activities, including investment requirements to make the ports “offshore wind ready,” Lewis says.

Also, worth noting, Philip Lewis will, on behalf of WER, on March 25, 2021, join speakers from Equinor, ABB, and Lloyds Register in discussing the opportunities that the US offshore wind market represents. Click here to register.