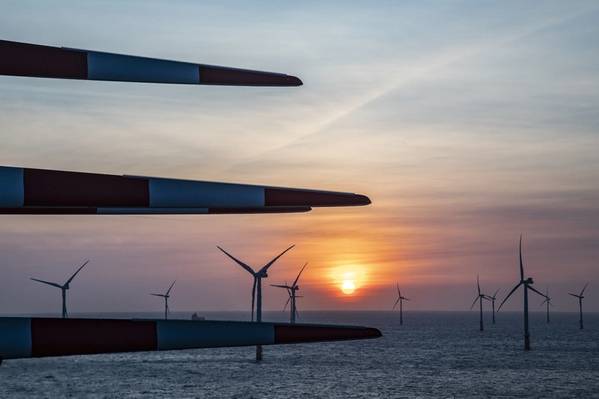 DEME Offshore will be responsible for engineering, procurement, construction, and installation (EPCI) contract for the foundations at Parkwind’s Arcadis Ost 1 offshore wind farm.

"The next-generation XXL monopiles will be the largest ever installed in Europe with a weight of around 2,000 tonnes each," DEME Offshore said.

As mentioned earlier, Deme Offshore has labeled the contract 'substantial,' which for DEME Offshore means it has a value of EUR 150-300 million.

Being developed by Belgium-based Parkwind, the Arcadis Ost 1 offshore wind farm will have a capacity of 257 MW. The wind farm will be located in the Baltic Sea, northeast of the island of Rügen in the coastal waters of Mecklenburg-Vorpommern, Germany.

Manufactured by Steelwind in Germany, the 28 XXL monopile foundations will be about 100 m long and weigh around 2000 tonnes each. One of the 28 foundations will support the offshore substation. The monopiles for the wind turbines will not be equipped with common transition pieces but will have a direct connection with the turbine tower.

DEME Offshore will deploy the DP3 offshore installation vessel ‘Orion’ for this project. It has described the vessel as "a mega monopile installation machine," which will be equipped with a motion-compensated gripper system able to handle "enormous foundations of up to 2,500 tonnes."

Bas Nekeman, Business Unit Director DEME Offshore: “Being awarded such a pioneering project highlights how Parkwind has confidence in the game-changing DP3 offshore installation vessel ‘Orion’. DEME Offshore is delighted that it will be the first company to install these XXL monopiles, as the offshore wind industry takes the next step forward. With ‘Orion’ we will be strongly positioned to offer solutions for the installation of larger foundations and turbines, and large-scale wind farm projects such as Arcadis Ost 1, delivering energy at lowers costs.”

Clement Helbig de Balzac, Arcadis Ost 1 Project Manager: “The signing of the foundation EPCI contract with DEME Offshore is another important step towards the realization of Arcadis Ost 1. The project is pushing the limits of what has been done to date in offshore wind in terms of foundation technology. Therefore, it was key for the project’s success to select a strong and highly experienced EPCI contractor such as DEME Offshore, deploying state of the art installation vessels and technology”.

Production of the monopile foundations will start in 2021, while the installation campaign is planned to start before summer 2022.

Danish offshore construction company Bladt will build a substation for the project. Offshore wind turbines for Arcadis Ost 1 will be built by MHI Vestas. The wind farm will feature 27 MHI Vestas V174-9.5MW turbines mounted on monopile foundations and one offshore substation.

Interestingly, Arcadis Ost 1 project is expected to be the first offshore wind farm that will make use of a floating vessel for the installation of Wind Turbine Generators.

Parkwind, together with Heerema Marine Contractors and MHI Vestas developed the floating installation method, as an alternative to traditional jack-up vessel usage, due to the challenging soil conditions at the Arcadis Ost 1 site.

Parkwind expects the method will allow for a reduced installation time and contribute to the further reduction of the levelized cost of offshore wind energy.

Arcadis Ost 1 is scheduled to be fully commissioned in 2023.