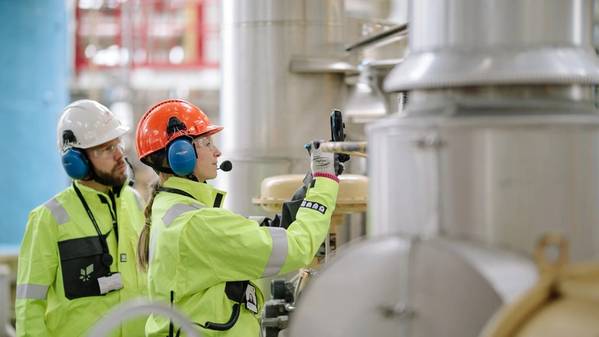 French energy firm Engie, and Norway-based Equinor said Thursday they were teaming up in development in "low-carbon hydrogen activities."

The partners will investigate the production and market potential for hydrogen from natural gas whereby the CO2 will be captured and stored permanently offshore.

The duo said it would examine the development of low-carbon hydrogen value chains in Belgium, the Netherlands, and France.

"In the coming months, Engie and Equinor will start discussions with potential customers to assess the project, as well as with stakeholders and relevant authorities," Equinor said in a statement.

The two companies said they believed it was essential to develop low-carbon and renewable hydrogen projects at scale in order to make it possible for industrial customers to significantly reduce CO2 emissions before 2030.

"This development of low carbon and renewable hydrogen will accelerate the construction of new hydrogen infrastructure and the repurposing of current natural gas infrastructure, thus paving the way for net zero in 2050," Equinor said.

Edouard Neviaski, CEO of the Engie's Business Unit Global Energy Management says: “We are glad to work on this project with Equinor, a long-standing partner for more than 40 years. ENGIE firmly believes that hydrogen will play a key role in the energy transition. Engie produces renewable hydrogen and supports the development of the market for low-carbon hydrogen. Both these technologies will be necessary to accelerate the development of a solid infrastructure and the transition to a carbon-neutral economy.”

Grete Tveit, Equinor’s senior vice president for Low Carbon Solutions says: “Equinor aims to be a leading company in the energy transition. We believe that hydrogen and CCS will be vital if we are going to succeed with the transition. Collaboration and partnerships will be absolutely necessary to find the best solutions. Our two companies have complementary areas of expertise that we can utilize to develop low carbon hydrogen initiatives together.”