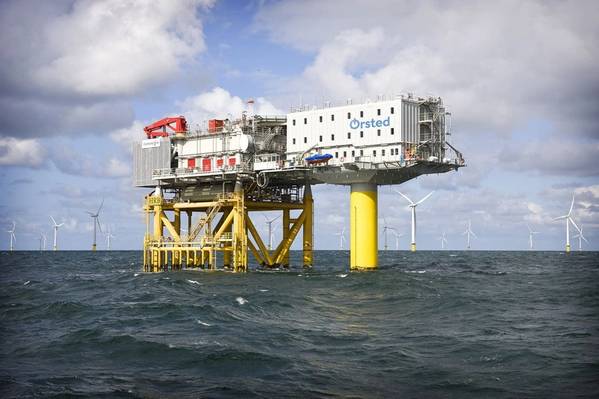 "Since HRH The Crown Prince inaugurated Ørsted's offshore wind farm Horns Rev 2 in 2009, the 91 wind turbines at the 35 km2-sized wind farm have generated enough wind power to cover 3 % of the total Danish power consumption," Ørsted said. The wind farm was inaugurated while the company was still known as Dong Energy.

Horns Rev 2 is located in the North Sea, 30 km off the Danish west coast, and was the world's largest offshore wind farm at its inauguration in autumn 2009 with a total production capacity of 209 MW. At the time, the wind farm was expected to supply electricity corresponding to the annual power consumption of 200,000 Danish households.

However, Allan Due Overbeck, Head of Operations at Horns Rev 2 says that Horns Rev 2 has exceeded all expectations: "Since 2009, the total power generated by Horns Rev 2 corresponds to the annual power consumption of more than 3 million Danish households. Technically, this means that over an 11-year period, Horns Rev 2 can document an exceptionally high capacity factor* of approx. 50 %. This shows that the North Sea holds fantastic wind power potential and, given its size, is the perfect location for offshore wind farms."

Ørsted says that Horns Rev 2 was also the first offshore wind farm to be located so far offshore and in waters with such high waves, meaning focus had to be placed on quality and logistics in designing the wind farm right from the outset.

Thus, the 91 wind turbines were placed in a fan formation to better utilize the wind, and the foundations were constructed of both steel and concrete to be able to withstand the extreme conditions offshore. Moreover, Ørsted says, it was the first time in history that an accommodation platform was installed in connection with an offshore wind farm.

"Horns Rev 2 proved that it was possible to generate offshore wind power on a large scale far from shore, and the experience gained from the wind farm has contributed to reducing the costs of renewable offshore wind energy, so that the European offshore wind projects being decided at the moment are fully competitive with power generated using fossil energy sources," Ørsted says.

Allan Due Overbeck: "From the very start, we've had to develop new ways of working and organizing the service and maintenance tasks as the wind farm is located about one and a half hours away by boat from the harbor in Esbjerg. Our dedicated and skilled employees help to ensure that we can always maintain a high level of availability while maintaining high safety standards."

The offshore wind farm produces most electricity in the cold and windy winter months when electricity consumption in Denmark is also at its highest. However, the wind conditions in the North Sea vary greatly from month to month. The current production record was achieved in January 2014 with 135,399,000 kWh, while production during a normal winter month is approx. 90,000,000 kWh, Ørsted said. 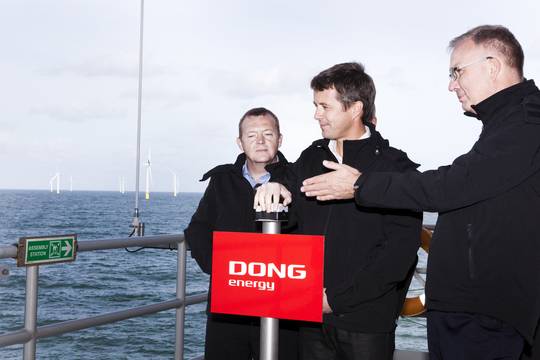 On 17 September 2009, HRH The Crown Prince inaugurated the Horns Rev 2 Offshore Wind Farm in the presence of Lars Løkke Rasmussen, then Danish Prime Minister, and Fritz Schur, then Chairman of Ørsted's (then Dong Energy's) Board of Directors. - Credit: Ørsted