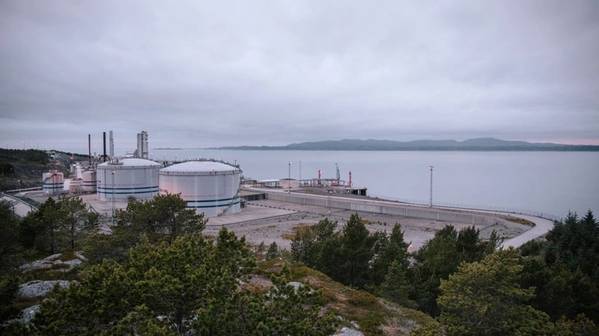 A fire at Norway's Tjeldbergodden industrial facility on Wednesday triggered an evacuation of staff and the shutdown of Europe's largest methanol plant and a gas processing terminal, state-controlled oil firm Equinor said.

A photo published by local newspaper Adresseavisen showed a large plume of black smoke rising from the plant, although the fire was put out after one hour, Equinor and the police said.

"There were about 30 people on site, but everybody was accounted for and no one was injured," Equinor spokesman Morten Eek told Reuters.

The company later released a statement saying it was working to get an overview of the consequences and the cause of the fire.

The Tjeldbergodden facility consists of three plants; a methanol plant, where the fire broke out, a gas receiving terminal, and an air separation plant.

Output at all three plants was shut, Equinor said.

The methanol plant accounts for more than 25% of European production and has an annual capacity of around 900,000 tonnes, according to Equinor data, and is owned by Equinor and ConocoPhillips.

This account for about 10% of European methanol consumption, Sparebank 1 Markets analyst Teodor Sveen-Nilsen said in a note to clients.

In December of 2018, a fire at the Tjeldbergodden facility closed down production for one month.

The gas terminal, which processes gas from the Heidrun offshore field, is owned by Equinor, Petoro, ConocoPhillips and Eni.

Production at the Heidrun field, which has the option to re-route gas to other processing facilities, was not affected, Equinor's spokesman said.

The site's air separation plant is owned by Equinor, Aga and ConocoPhillips.

In September, Equinor's Arctic Hammerfest liquefied natural gas (LNG) plant in northern Norway caught fire and will be shut for up to one year, the company has said.