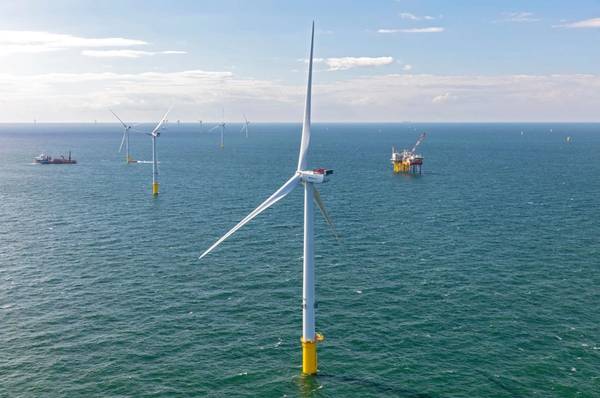 The Blauwwind consortium has informed that its Borssele III/IV wind farm in the Dutch North Sea has achieved first power.

The key milestone in the construction of the offshore wind project was achieved on Friday morning.

The first turbine is now generating power and delivering renewable electricity into the Dutch grid.

Blauwwind, made up of Partners Group, Shell, Eneco, DGE and Van Oord, said that 36 of the 77 turbines are now installed and after undergoing further initial tests in the coming weeks. It is expected that one additional turbine will become operational per day.

The completion of the offshore wind farm is currently expected in October 2020. Total expected power generation is 3,000-gigawatt hours (GWh) per year, enough to power more than 825,000 Dutch households.

“I am proud of the team that has managed the safe execution and the commissioning phase, achieving first power on time,” says Roeland Borsboom, Project Director and CEO for Blauwwind. "Keeping a project of this scale and complexity on track in these challenging times can only be managed through good collaboration and flexibility. The delivery of First Power has been achieved in close cooperation with partners Van Oord, MHI Vestas, and TenneT, who has provided grid readiness one month ahead of time."

Shell and Eneco Group have secured 15-year Power Purchase Agreements (PPAs) from the Blauwwind consortium, under which each will buy 50% of the power generated by the wind farm.

Van Oord has executed the engineering, procurement and construction of the foundations and inter-array cables. The offshore substation Borssele Beta has been designed and constructed by TenneT.