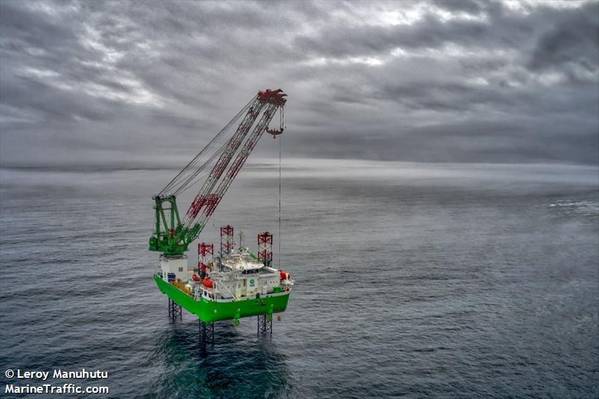 A video has emerged online showing a wind turbine blade knocking an offshore installation vessel's gangway into the sea.

The incident happened on July 2, at the under-construction Otary-operated SeaMade wind farm offshore Belgium, with no injuries to personnel reported. The vessel in question is DEME Offshore's Apollo jack-up installation vessel.

When asked to provide more info on the incident, an Otary spokesperson told Offshore Engineer the following: "Due to the collision, the gangway detached from ‘Apollo’ and fell into the sea. There were no employees on the gangway at the time of the incident. All employees are safe and no injuries were reported."

The installation works were immediately paused, and the Apollo’ returned to Ostend for some minor repairs and the re-installation of another gangway, the spokesperson said.

"The cause of the incident is currently being investigated and ongoing," the Otary spokesperson said.

SeaMade, operated by Otary, is a 487,2 MW offshore wind concession in the Belgian North Sea. It will consist of 58 SGRE (Siemens Gamesa Renewable Energy) turbines. Once complete, it will be Belgium's largest offshore wind farm.

The project - located 40-51 km north of the Ostend headquarters - will be the 7th offshore wind project in the Belgian North Sea.

SeaMade will be fully operational by the end of 2020 and will produce enough electricity to power 485,000 Belgian homes annually. The first turbine, and most likely the one that was part of the incident, was completed earlier this month.