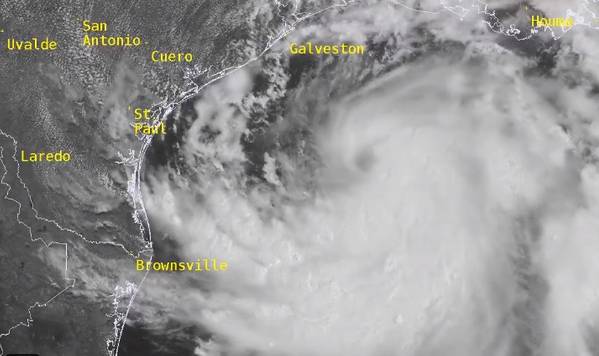 Hanna is the eight named storm of the 2020 Atlantic hurricane season (Image: NOAA)

Energy companies said on Friday there have been no evacuations of workers or shutdowns of production from their offshore platforms in the U.S.-regulated northern Gulf of Mexico because of Tropical Storm Hanna.

"The tropical storm has had no impact on Murphy Oil’s Gulf of Mexico operations given its weakness and location in comparison to our assets," said Murphy Oil spokeswoman Megan Larson.

Hanna is the eight named storm of the 2020 Atlantic hurricane season and began as a tropical depression in the central Gulf that brewed up in to storm within 24 hours.

BP spokesman Jason Ryan said the company's offshore production is primarily south of the coasts of Mississippi and Louisiana.

"No, we're not taking any action because it's well west of our production," Ryan said in a telephone interview.

Chevron spokeswoman Veronica Flores-Paniagua said in an emailed statement that Hanna has not impacted the company's offshore operations.

"Chevron has not evacuated any personnel in the Gulf of Mexico, and there has been no effect to production at our Chevron-operated facilities as a result of the tropical weather, Flores-Paniagua said in an email

Representatives of Valero Energy Corp and Koch Industries Flint Hills Resources did not reply to questions about the status of their refineries in Corpus Christi.