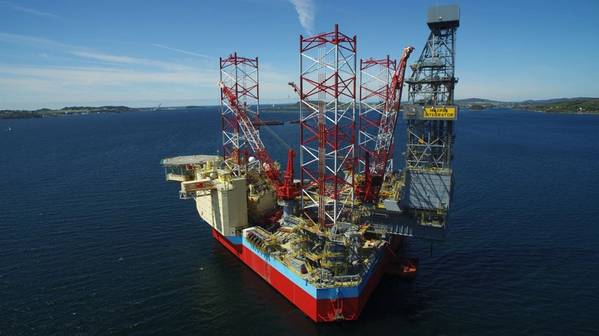 The Norwegian authorities on Wednesday granted oil company Aker BP consents to use the Maersk Integrator and Deepsea Nordkapp drilling rigs at the Ivar Aasen and Alvheim fields, respectively.

At the Ivar Aasen field in the North Sea, Aker BP will use Maersk Drilling's Maersk Integrator ultra-harsh environment jack-up rig for production drilling operations. The Ivar Aasen has been in production since 2016.

The development, sitting in a water depth of 110 meters, comprises production, drilling and quarters (PDQ) platform with a steel jacket and a separate jack-up rig for drilling and completion. Aker BP last week said that a two-well IOR campaign has been matured for execution. The first well is scheduled to be spud by end of August, and the campaign will be completed by the end of the year.

Oil and gas from the Ivar Aasen are transported to the Edvard Grieg platform for final processing. The oil is exported by pipeline to the Grane Oil Pipeline, which is connected to the Sture terminal. The gas is exported in a separate pipeline to the Scottish Area Gas Evacuation (SAGE) system in the UK.

Separately, Aker BP has been granted a consent to use Odfjell Drilling's Deepsea Nordkapp semi-submersible drilling rig for production drilling on the Alvheim field, also in the North Sea.

Alvheim is a field in the northern part of the North Sea, west of Heimdal. The water depth in the area is 120–130 meters. The field has been developed with subsea templates tied to the Alvheim FPSO. Production started in 2008.

Both consents for the use of the two drilling rigs have been granted by the Petroleum Safety Authority Norway.