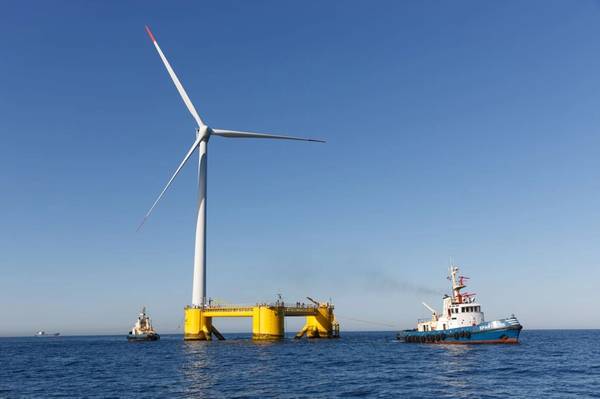 Ireland-based offshore renewables company Simply Blue Energy is stepping forward with the development of a floating offshore wind farm of up to 1GW capacity in the Celtic Sea, offshore Ireland.

The company has this week made an application to the Irish Department of Housing, Local Government & Heritage for a license to carry out initial site investigation works under the Foreshore Act, 1933, in an area off the Kinsale coast, County Cork, Ireland.

The floating wind farm is planned to be located near the Kinsale gas field, which is currently being decommissioned.

The project named Emerald envisions is expected to be delivered as a staged development starting with a pre-commercial array of approximately 100MW and building to an overall capacity of 1GW upon final completion.

"This “stepping-stone” approach is designed to encourage the growth of the local supply chain, bringing as many jobs to the local area as possible, while building the infrastructure necessary to deliver a project of this scale in a manner that will benefit the community, local stakeholders and the country," Simply Blue Energy.

Floating offshore wind technology allows wind turbines to be deployed in much deeper waters (greater than 60m) than fixed bottom alternatives freeing them to be situated in otherwise unviable areas off the south and west coasts and enabling them to be placed further offshore,  reducing visual impacts.

Sam Roch-Perks, Managing Director of Simply Blue Energy said: "Ireland has massive unrealized potential for offshore wind energy production, particularly on the south and west coasts, and state of the art floating wind technology is the key to unlocking that potential. With a sea area 10 times that of our land mass, we have a chance to catch and become a leader in offshore wind energy production both in Europe and globally, allowing us to become the “Green Gulf” of renewable energy.”

The Irish Government’s Climate Action Plan published in 2019 set a target capacity of at least 3.5 GW for offshore wind energy production by 2030 and the new Programme for Government intends to raise this target to 5 GW by 2030. ,

A 7% per year reduction in overall greenhouse gas emissions has also been targeted, raising the importance of renewable energy production projects.

Dr. Val Cummins, who will be leading the Ireland team on behalf of Simply Blue Energy, said “With the new Programme for Government here in Ireland, offshore wind energy production and cuts in greenhouse gas emissions have been given renewed focus. Innovative and ambitious offshore wind energy projects such as this are vital to help us meet our goals and ensure our children benefit from a sustainable future.”