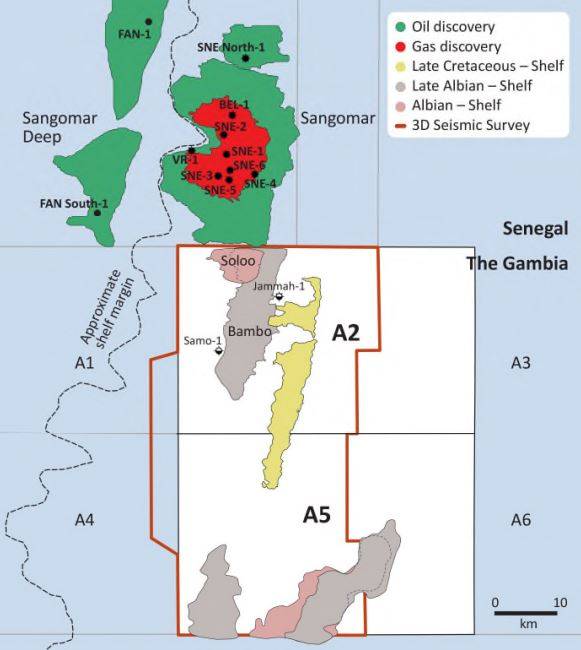 Australian oil and gas company Far has signed new Joint Operating Agreements with Petronas related to the A2 and A5 offshore blocks in The Republic of The Gambia.

This follows the granting of new licenses for those blocks by the country's government effective October 1, 2019, after which Far and Petronas took the opportunity to update the terms of the existing JOA’s by entering into new JOA’s with effect from October 1, 2019.

"Far remains as operator under the new JOA’s which better reflect the terms of the new licenses. Efforts to find an additional partner for the drilling of the next well in The Gambia are ongoing with FAR having run numerous data room presentations for interested parties. FAR is working to conclude a farm-out before the restart of the drilling operations," FAR said.

FAR has a 50% interest in Block A2 and Block A5 in The Gambia. The blocks cover an area of approximately 2,682km2  within the MSGBC (MauritaniaSenegal-Guinea-Bissau-Conakry) Basin and lie approximately 30kms offshore in water depths ranging from 50 to 1,200 meters.

In combination, Blocks A2 and A5 have the potential to contain prospective resources in excess of 1 billion barrels of oil (on an unrisked, best
estimate, 100% basis), Far said. Both blocks are located to the south of FAR’s Sangomar Field development offshore Senegal, Far said.

According to Far, technical and commercial analysis supports drilling of the Bambo well to test the main target of S400 series sands (152 mmbbls, P50, gross), which Far has mapped as the southern culmination of the Sangomar Field extending into The Gambia. The Bambo prospect has multiple reservoir targets, having two of the main reservoirs in S400 series sand being hydrocarbon-bearing in the Sangomar wells.

Preparations are now underway for the start of drilling operations. Initial planning has further highlighted the opportunity to locate a single well to intersect both the main target, S400 series and a shallower, secondary target at the S390 sand (464 mmbbls, P50, gross), Far said.

"The operational team that managed the Samo-1 well campaign was reassembled in Q4 2019 with significant progress being made however drilling activities have currently been suspended in the wake of COVID-19 and will recommence when it is safe to do so," Far said.

Worth noting, when it comes to the nearby Sangomar development in Senegal, Far has earlier this week said that its Senegalese subsidiary had defaulted on its obligations to the Sangomar joint venture, as the company looked to sell its interest in the project.

If it doesn't pay up for its financial obligations within 6 months from the date of notification of the default, Far will forfeit its participating interest in Sangomar without compensation.

Australian oil and gas company Woodside has this week said that its $4.2 billion Sangomar project offshore Senegal, is still on track to produce first oil in 2023.

The company was responding to media reports stating that Senegal has been forced to delay its first oil and gas projects by up to two years because of the COVID-19 pandemic.