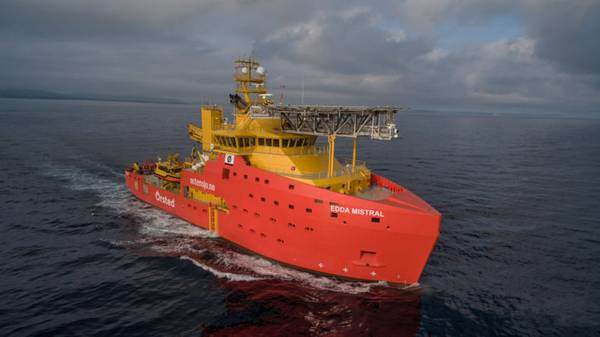 Norwegian offshore vessel operator Østensjø has said it is assisting in the ongoing search and rescue (SAR) after a fighter jet crashed off the UK coast on Monday.

"Østensjø's offshore wind vessel “Edda Mistral” and her autonomous workboat “Mistral Worker” were in the vicinity of the fighter jet crash off the UK coast. Both vessels are engaged in the ongoing search and rescue SAR operation," the company said Monday.

The vessels are reporting to UK Maritime and Coastguard Agency who is coordinating the SAR-operation.

"HM Coastguard is coordinating the response after reports were received of an airplane going down into the sea 74 nautical miles off Flamborough Head," the coast guard said.

The HM Coastguard search and rescue helicopter from Humberside has been sent along with Bridlington and Scarborough RNLI lifeboats. Following a Mayday broadcast by HM Coastguard, other vessels nearby are heading to the area.

"It is believed the aircraft had one person on board. We have no further information at this time," HM Coastguard said Monday.

In a statement on Monday, Royal Airforce Lakenheath said: "A U.S. Air Force F-15C Eagle crashed at approximately 0940 today in the North Sea. The aircraft was from the 48th Fighter Wing, RAF Lakenheath, United Kingdom. At the time of the accident, the aircraft was on a routine training mission with one pilot on board. The cause of the crash as well as the status of the pilot are unknown at this time, and U.K. Search and Rescue have been called to support."

In a subsequent statement on Monday evening, the U.S. Airforce 48th Fighter Wing division said the pilot had been found and confirmed deceased, and the UK coast guard said the SAR had been called off. Read more on our sister website MarineLink.