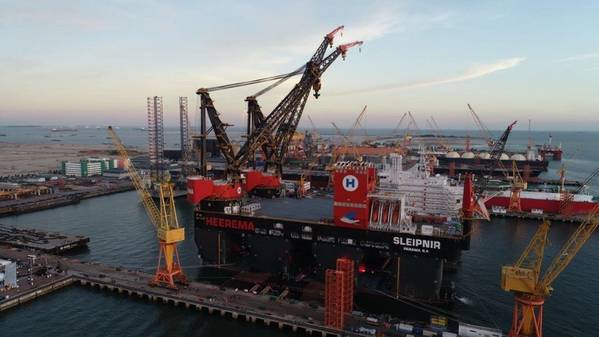 Singapore's Temasek Holdings stepped in on Monday to support a S$2.1 billion ($1.5 billion) rights issue by Sembcorp Marine as the state investor moves to help the city-state's struggling rig-building sector.

Following the deal, loss-making Sembcorp Marine, which has been hit hard by an industry downturn, plans to demerge from its parent company Sembcorp Industries.

"It's just the next step in Singapore's long overdue consolidation of the offshore and marine sector," said KGI Securities analyst Joel Ng. "The end result is that Temasek will eventually be the biggest direct shareholder of Sembcorp Marine," he said.

Last year, Temasek offered to buy control of conglomerate Keppel Corp, whose businesses include rig-building, in a S$4.1 billion deal.

Conglomerate Sembcorp Industries, which owns 61% of Sembcorp Marine, said it planned to demerge the marine company by distributing its stake to shareholders as dividends after the rights issue.

Sembcorp Industries will take up S$1.27 billion in the rights issue and an extra S$230 million if needed. It will do so by converting into equity a S$1.5 billion loan made to Sembcorp Marine in 2019.

The announcement came after trading in shares of both companies were halted last Thursday.

Temasek has agreed to subscribe for up to S$600 million of the rights plan under a deal with DBS Bank, the issue's underwriter and financial adviser to the marine firm.

"We recognize these are difficult times and the companies are operating in an uncertain and volatile world," said Nagi Hamiyeh, joint head of Temasek's investment group.

The five-for-one rights issue is priced at S$0.20 per rights share, or a 76% discount to the pre-deal close of S$0.85. Sembcorp Marine was last valued at about S$1.8 billion.

Credit Suisse is the adviser to Temasek. ($1 = 1.3938 Singapore dollars) (Reporting by Anshuman Daga and Aradhana Aravindan; Editing by Muralikumar Anantharaman and Mark Potter)