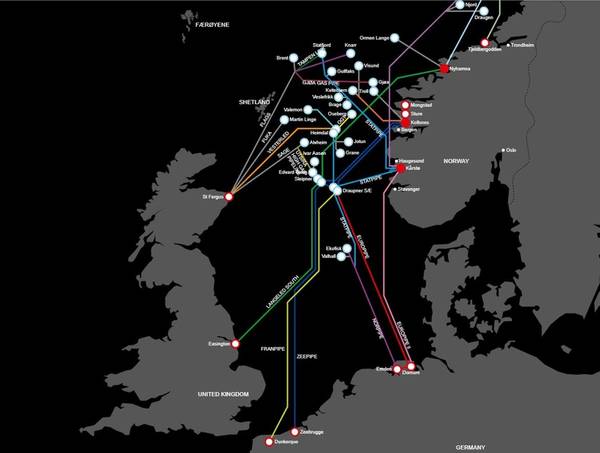 Pipeline gas flows from Norway to Britain fell 44% on Friday from the start of the week as the summer gas season starts and coronavirus lockdowns continue to hit demand, data shows.

Pipeline gas flows to Britain fell to 49.7 million cubic meters (mcm) per day on Friday, down from 88.6 mcm on Monday, according to data from Norway's gas system operator Gassco.

Deliveries to continental Europe remained broadly steady at over 240 mcm/day.

Gas traders said UK demand was partly reduced by temperatures rising to above normal levels over the weekend and most of the following week, and the beginning of April also marks the end of the heating season when importers adjust volumes.

But the market is expecting production reductions due to the unprecedented slump in energy demand in Europe and stoppages in most power-intensive manufacturing due to lockdowns in several European countries.

European power and gas prices have sunk to new lows, with the benchmark European gas price for month-ahead at the TTF hub hitting a record low of 6.60 euros per megawatt-hour (MWh) this week.

Norwegian gas system operator Gassco and the country's largest gas producer Equinor were not immediately available to comment on the fall in gas exports to Britain.

"Besides the massive decline in oil prices, the gas market is under pressure from record-high stocks, which are currently 25% fuller than the average level at this time of year over the past five years," said analysts at Commerzbank.

"This is the result of last year’s record-high shipments via pipelines and liquefied natural gas terminals, coupled with a mild winter," they added.

Gas analysts at Refinitiv said that gas suppliers have incentives to reduce deliveries to Europe if gas prices fall to 6 euros/MWh and have noted signs of Norway cutting the production for commercial purposes as of April 2.

Equinor and Gassco have said they are delaying maintenance work at gas processing plants and platforms, which means more gas is available.

Russia could also reduce supply by 8 bcm to northwest Europe this summer compared to last summer, they added. Russian natural gas production fell by 12.3% in March in annual terms to 59.41 billion cubic meters.