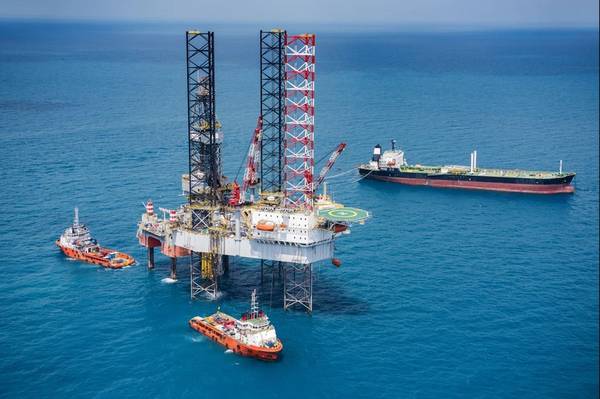 Norwegian energy intelligence company Rystad Energy has painted a bleak picture for the drilling rig market outlook in South East Asia but has also said that Malaysia's Petronas will have a large role in where the market goes. Further, the intelligence firm has pointed to a unique SE Asia NOCs relationships with local drilling firms.

Citing the cuts in budgets made by oil companies on the back of the Covid-19 pandemic and the Saudi-Russia price war that has sent the oil prices down to historic lows, Rystad said that the rig market that was set for growth was going to decline.

"E&Ps in Southeast Asia have been very cautious by locking in rigs on long term contacts, making it unlikely that options will be exercised. We see that if no new contracts are signed and no options are exercised for the remainder of 2020, utilization will drop by 54% in the region from March to December. This translates to an 18% year-on-year drop from 2019 levels," Rystad said Tuesday.

Of the options in the regional market for 2020, 40% are for work with Petronas, Rystad said, adding that, therefore, Southeast Asia's rig market development in 2020 "will be quite dependent on the volume of options that Petronas decides to exercise."

"Petronas is proactively striving to keep operations running as smoothly as possible, and rigs with local crews might not be greatly inhibited. However, after the recently announced two-week extension of the lockdown in Malaysia, several rigs operating in the country are expected to gear down activity in the next few weeks due to crew timeout," Rystad said. 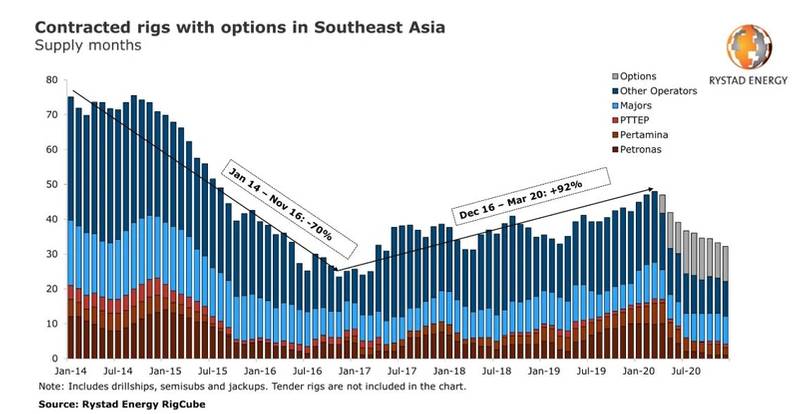 According to the Norwegian company, most of the planned drilling programs in Southeast Asia this year are comprised of brownfield work, and Rystad expects operators to reduce their drilling budgets most within the infill drilling segment.

It's not all negative

"On a slightly more positive note, existing rig contracts probably face less danger of being terminated in Southeast Asia – where national oil companies tend to support the national drilling contractor – than in other regional markets. That is not to say there won’t be any contract terminations, but we expect the intensity to be lower than it is globally,“ says Rystad Energy’s senior oilfield service analyst Jo Friedmann.

Looking at activity in the coming year, lower oil prices are expected to slow sanctioning activity in the region, meaning less demand for drilling and completion services, as well as for offshore oilfield services in general.

"During the previous downturn, the pace of sanctioning long-cycle deepwater projects slowed, and we expect this trend to be repeated," Rystad said.

New deepwater projects currently under evaluation by operators in Southeast Asia are likely to face delays, Rystad said, though there hasn’t been any direct communication from operators yet to this effect. The Limbayong project in Malaysia, Abadi in Indonesia, Shew Yee Htun in block A6 in Myanmar, and the Kelidang Cluster in Brunei, are all considered to be at risk in the current oil price environment.

"The oilfield service industry is now far more fragile than it was in 2014. The expected reduction in activity will, in all likelihood, translate into lower prices – and this will probably happen sooner rather than later, “ adds Friedmann.

According to Rystad, reports suggest that operators are asking service companies for a 20% to 25% reduction in pricing globally, a trend Rystad expects to see in Southeast Asia as well.

"Should the oil price and virus issues persist for six months or more, we could again see a race to the bottom, with rig rates plummeting towards operational expenditure levels. For players in the Southeast Asian well services segment, unit prices have not grown as quickly in recent years as they have for drilling contractors, and therefore a smaller price drop is expected," Rystad said.