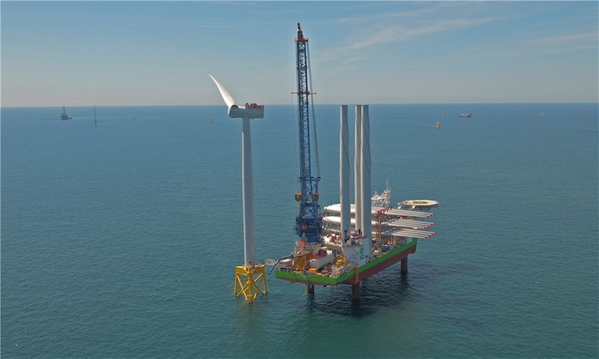 Iberdrola said the transaction would add momentum to the project, which is scheduled to begin construction in 2021.

Once fully operational in 2023, the installed capacity of 496 megawatts will produce enough clean energy to satisfy the needs of around 835,000 consumers, the company said.

Jonathan Cole, Iberdrola's Global Managing Director for offshore wind, said: “The Saint-Brieuc project is now ready to get started on construction. All agreements are in place, the funding is secured and contracts are signed. Our detailed Industrial Plan will also support new factories and highly-skilled clean energy jobs in France."

Located approximately 16 kilometers off the coast of Brittany, the Saint-Brieuc plant will require an overall investment of around €2.4 billion.

"We are hoping that the final legal and administrative matters will be concluded quickly, and then this major €2.4 billion investment in a cleaner energy future will be ready to run full speed," Cole said.

The Saint-Brieuc offshore wind farm will be equipped with 62 Siemens Gamesa wind turbines, each with an 8 MW capacity, installed in a 75-square-km area. The turbines will have a total height of 207 meters.

According to Iberdrola, the company's offshore wind project pipeline currently consists of 12.4 GW (gigawatts) in three main areas: the North Sea, the Baltic Sea and the United States

"With €13.26 billion (39%) out of Iberdrola's total €34 billion global investment plan up to 2022 earmarked for renewables, offshore wind is a cornerstone of the company's strategy," the company said.

The group is currently operating three offshore wind farms: West of Duddon Sands, which began operations in the Irish Sea in 2014, and Wikinger, in the German waters of the Baltic Sea, operational since December 2017.

In the United Kingdom, the company's largest project to date, East Anglia ONE, is now also generating power and nearing completion. Around 80% of the wind turbines (82 of 102) are now installed. Once completed, the 714 MW of installed capacity will be capable of powering 630,000 UK homes for an investment of £2.5bn