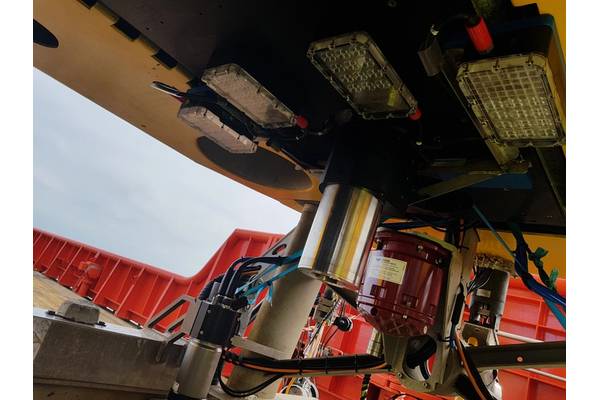 Armed and ready: an Ecotone Underwater Hyperspectral Imager, or UHI, attached to an ROV (top) and stand-alone. Photo: Courtesy Ecotone 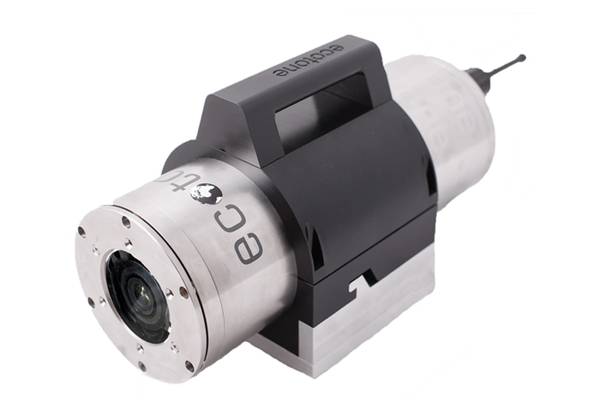 Armed and Ready: an Ecotone Underwater Hyperspectral Imager, or UHI, attached to an ROV (top) and stand-alone. Photo: courtesy Ecotone 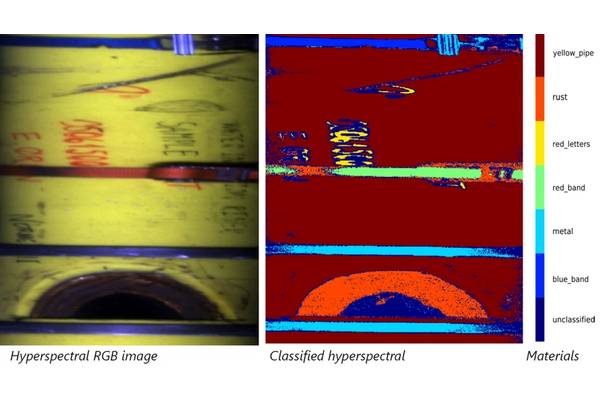 RGB versus spectral: the trained image on the right is codified and archived and forms the basis of report-generation. Illustration: courtesy Ecotone

There are surveys, and then there are surveys. For survey-tech outfit, Ecotone, the business model is offering a faster, digital way to monitor the health of seabed environments and offshore infrastructure. There’s enough to do with Norway set to invest $4.89 billion in pipelines in 2020 to add to thousands of kilometers of pipe worldwide. The Trondheim company’s Underwater Hyperspectral Imager, or UHI camera, uses the unseen colors of the spectrum to ID and archive pipeline anomalies, moving biology or rare coral — no x-rays or acoustic pings.

Equinor was so impressed with Ecotone’s UHI sensing, or hyperspectral camera tech, their investment arm … invested. Aquaculture giant, SalMar, bought a version of the tech to monitor biological conditions, a job normally done by humans. What both companies see is the UHI’s ability to count and define trouble spots while automatically codifying and archiving innumerable digital images for speedy analysis. In fact, digitally notating and analyzing the unseen could offer the fastest fast way to environmental compliance and maintenance assessments over large areas.

Speed is essential, for an environmental impact assessment survey — for an oilfield, a pipeline or a salmon farm — is only the start of site work. These early steps could entail photographing marine biology over an area that could comprise hundreds of kilometers (for a pipeline survey) or just a square mile for a salmon farm. For inspections of existing pipelines or other subsea infrastructure by ROV or UAV, the market offers no all-in-one survey tool of biology and pipeline health: bathymetric surveys are just that, and pipeline surveys today require a pooling of expert minds.

While Ecotone’s equipment promises speed, the development path to efficient surveying by UHI attached to ROV or UAV began slowly. The camera itself was a 2009 NTNU university spin-off that followed successful optical fingerprinting tests. Its hyperspectral imager — which sees 400 colors versus the HD camera’s red, green and blue — quickly showed it could do inspections of vast, sprawling, subsea infrastructure and of seabed life. 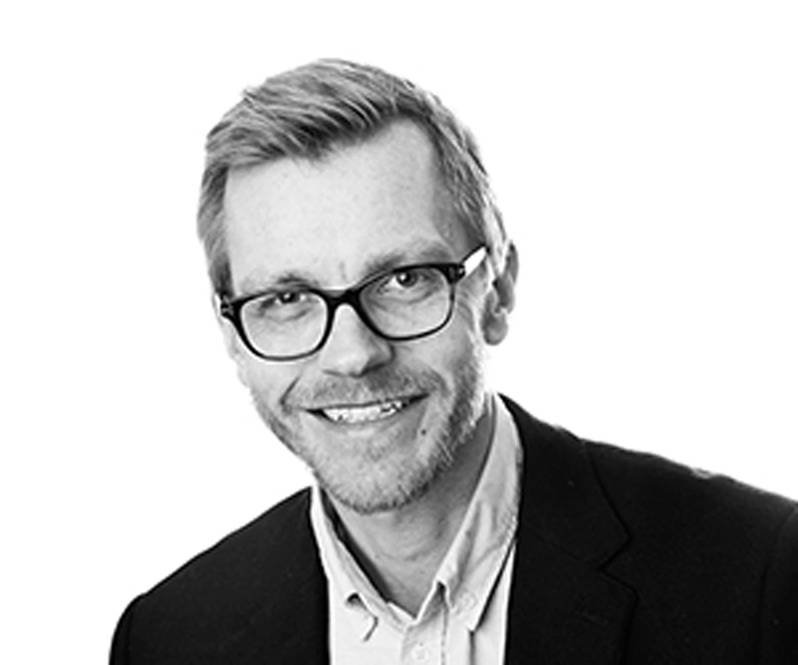 It excelled at pipelines, where anomalies could range from torn seals to worn welds, corrosion and leaks. The UHI could find flaws on silt-covered pipes that would remain invisible to an ROV using regular cameras and lights or UAVs with available sensor arrays. By 2016, the UHI had evolved for pipeline IMR into SpectraPipe with analysis and archiving software understood to be faster and safer than x-ray or acoustic methods of pipeline maintenance surveying.

“It’s all automated based on machine-learning principles,” says Ecotone CEO, Oddbjoern Roedsten, adding that tweaks to the equipment to 2016 have led to today’s first commercial uses. “There has been development on the data analysis side with a higher degree of automation to cut down on the time and work involved in data processing and analysis, and it allows us to deliver an effective and accurate service for mapping and inspection.”

Vital speed
While pipeline inspection continues to see the introduction of new UAVs and ROVs that move down the survey track faster, they’re nothing without their sensors. That’s where Ecotone comes in: working with surveyors to compile the IMR and seabed survey data in a manner that allows speedy analysis and decision-making.

A UDI-equipped ROV affords the ability to effect a stand-alone study that provides the deciding data needed to compile an environmental or pipeline report. A 2017 survey of starfish below a salmon net-pen, for one, discovered they moved away from fish waste deposits before new species moved in. “We tell the system, “This is a starfish.” Then we build a spectral library of the species we observe,” says Roedsten.

Having written before about hyperspectral cameras on UAVs before, we note this is the first mention of money-making tech. The UHI has been tested on UAVs, Roedsten says, but not in commercial settings yet. “Our current method of operation is with ROVs, and there are no specific requirements for the ROV (or UAV) except a size that accepts the payload and depth ratings for the specific surveys. We have no underwater vehicles (at) Ecotone, but use the vehicles available from the different survey companies.”

No, hyperspectral imaging sensors or cameras that ID objects or chemicals aren’t new. It’s the tech used in remote sensing satellites and airplanes, where reflected light of all wavelengths is converted to digital information. Spectral signatures vary by color and chemistry, hence the designation: optical fingerprinting technology.

The SpectraPipe UHI has a depth rating of between 500 and 6,000 meters (or between shallow water by offshore oil and gas standards and a medium-deep oceanic trench). Attached to an ROV or AUV, the system brings lights, altimeter and a pressure sensor to bear while performing its online and offline recording. A medium or large ROV or AUV is needed, one with a 12-72 VDC power supply and an ethernet link to a topside vessel. 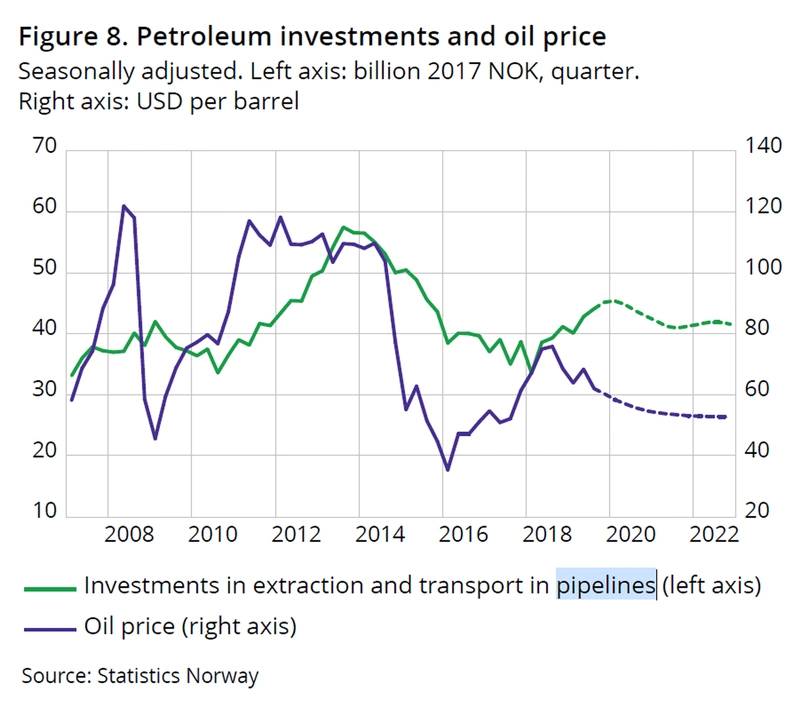 Operator Choice: variants of the Ecotone hyperspectral camera. Photo: Courtesy EcotoneAlgorithmic appeal
A topside control system — Ecotone’s trademark Immersion SW for UHI control — provides a live view from the camera and real-time configuration of the data being captured and stored.

The processing of survey results is a major Ecotone strength and key to event detection, description and codification. Apart from the resulting library of known materials, algorithms automate the notation that happens before an online report is generated automatically.

The alternative is pipeline inspection as it’s largely done today: by visual inspection using HD cameras mounted on ROVs, with the results gone over by a team of experts. “This is both time consuming and exposed to human error and subjectivity,” Ecotone marketing materials insist. By using the UHI, anomalies invisible to the human eye are detected and defined automatically. No need for a team of pipeline experts every time. Fill fail is fill fail.

Back onshore, the client is handed a detailed report based on a post-processing of UHI visual data that yields high-quality analysis.

A best practice
One way to satisfy all stakeholders on pipeline safety is to generate reports quickly, and they are needed regularly: by pipeline operators and owners; by classification societies; by suppliers and by regulatory enforcement.

One common area of concern is pipeline joint failures that could lead to hydrocarbon leaks or prevent such operations as hot taps (cutting into “live” pipe) or fittings attachment. Field joint damage is the jargon, but it appears to be a survey area SpectraPipe excels at. We’re shown how the SpectraPipe classifies exposed polyurethane filler by producing an instant IMR code. Generated codes for field joints are FJFD for filler damaged; FJFE (filler exposed or loose wrapping) and FJCC (corrosion coating exposed). The coded “events” accrue and help form a readable, accurate pipeline report.

That’s where Ecotone can help: by scanning miles of connections, en masse, and then storing the descriptive data with GPS positions. DNV GL standards, service specifications and recommended practices might then be used to quickly assess the overall bill. Hence the writer’s assertion that this UHI system looks like it’ll be capable of speeding compliance on best practices for subsea pipelines.

Just the start
The Ecotone method is expected to develop into a way to inspect other subsea installations — from submerged jackets to stands of subsea trees and their manifolds — so, there’s a giant worldwide market at hand.

While, there are other pipeline inspection tech companies out there, bathymetric and pipeline-positioning data seems a biproduct of Ecotone’s core activity. SpectraPipe condition and environmental imagery is key, and it also generates mapping info.
“Our goal is to continue delivering mapping and inspection services for both oil and gas and aquaculture applications,” he says. “During 2019 we have performed several seabed mapping surveys for (both industries), looking at environmental impact from drilling operations and salmon farming operations.”

For now, Ecotone will “actively seek” IMR pipeline and subsea inspection work in the pipeline integrity market. They’ll talk to “operators and survey companies to identify projects where our solutions are a good fit”.

That ought to go well, as Equinor Tech Ventures is an owner — as are local investors, the company founders and its employees. For 10 full time employees, this IMR story is just the beginning.