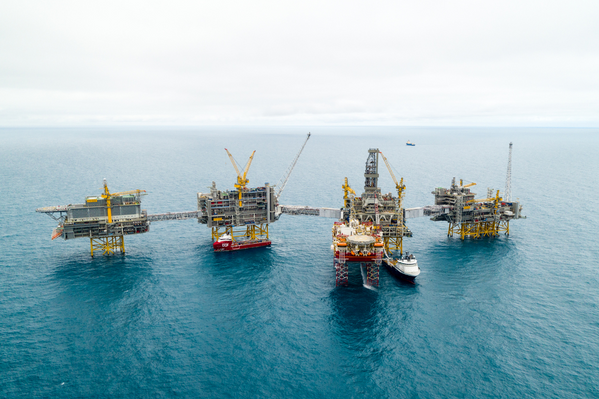 Norway's Equinor reported a smaller-than-expected drop in fourth-quarter core operating profits on Thursday as the startup of a major new oilfield partly mitigated the impact from weak European gas markets.

The Oslo-listed company's adjusted earnings before interest and tax (EBIT) fell to $3.55 billion in the fourth quarter from $4.39 billion in the same period of 2018. A poll of 25 analysts compiled by Equinor had forecast adjusted EBIT of $3.37 billion.

The company's overall oil and gas output will grow by 7% in 2020, boosted by the start of production from the Johan Sverdrup field in the North Sea, Equinor said, while the average annual growth between 2019 and 2026 is still seen at 3%.

"Johan Sverdrup phase 1 will contribute to strong growth at the Norwegian continental shelf," Chief Executive Eldar Saetre said in a statement. Norway's total oil output is expected to grow by 43% from 2019 to 2024, much of it coming from Sverdrup, forecasts from the Norwegian Petroleum Directorate (NPD) showed in January.

The cash payout to owners was increased to $0.27 per share for the fourth quarter from $0.26 in the third, matching a $0.27 predicted by analysts in a Refinitiv poll. Equinor said in November it expected Norway's petroleum output, based on current resources, to fall by more than half by 2050 however, and the company is busy exploring for oil in other parts of the world. In the coming years,

Equinor's global operations will benefit from field startups in Canada, Britain and Brazil, among others, Saetre added. Overall exploration spending will likely fall in 2020 to $1.4 billion from $1.6 billion in 2019, while overall capital expenditure on oilfields and other investments will amount to $10 billion-$11 billion, versus $10 billion last year. In 2022 and 2023, annual capital expenditure is expected to rise to around $12 billion, Equinor added. While Equinor's oil output rose in the fourth quarter, it has cut back on gas deliveries amid an influx of liquefied natural gas (LNG) to Europe.

The price of both gas and oil has also dropped, impacting earnings, the company said. Equinor booked impairments of $1.41 billion in the fourth quarter, most of it related to Norwegian oil and gas assets, mainly due to a change in methodology to account for tax implications in impairment evaluations, the company said.

As a result of the write-down, the company's net result for the fourth quarter swung to a loss of $230 million from a year-ago profit of $3.37 billion. Equinor's shares have fallen by 13.7% in the last 12 months, underperforming a 7.7% drop in European oil and gas stocks.