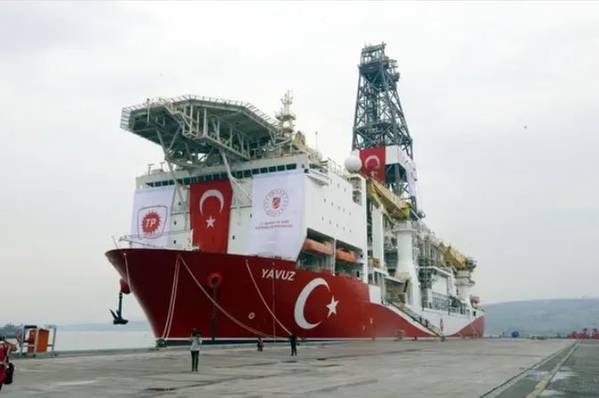 One of two drillship used by Turkey to drill in the Mediterranean Sea near Cyprus (Photo: Turkish Minister of Energy and Natural Resources)

Cyprus is blocking new European Union sanctions against several officials from Russia-annexed Crimea in a bid to secure EU backing for tougher action against Turkey in a separate row over drilling for hydrocarbons, three diplomatic sources said.

Nicosia denied linking the two issues and said it needed time to review the proposed measures against the Crimean officials.

Cyprus, backed by the EU, accuses Turkey of drilling illegally for oil and gas in its territorial waters. The EU has prepared the ground for travel bans and asset freezes but has postponed saying which Turkish officials they would target in order to give Ankara time to change tack.

The EU has also agreed to blacklist more officials in Crimea, which Russia annexed from Ukraine in 2014, but the sanctions require unanimous support from all 28 member states and Cyprus has recently blocked the process at the technical level, the sources said.

"The way Cyprus is hijacking the Russia listings has deeply irritated its friends and partners around the table. It is all the more surprising since Cyprus has enjoyed unparalleled solidarity from its EU partners over the last few months (in the dispute with Turkey)," said one EU diplomat. A second diplomat, also speaking on condition of anonymity, said Poland and Germany were among those pushing Cyprus to stop blocking the new Crimea measures.

"The Cypriots want to have sanctions on Turkey for drilling and have been frustrated that it is taking time," said the second diplomat. "This is why they are meddling with the Crimea listings."

"There is no connection made between the two sanctions regimes. We are in the process of reviewing the information provided with regard to the Ukraine sanctions," Cypriot foreign ministry spokesman, Demetris Samuel told Reuters.

On Turkey, Samuel added: "Our aim is to see the (EU decisions) implemented. We feel that it is important... to expedite and finalize this work with regards to the listings."

A third EU diplomat said he still hoped the list of sanctioned Crimean officials would be approved "early next week", or the matter would have to go before EU ambassadors.

"Everything depends on Cyprus and whether they will drop their objections," he said. If sanctions are imposed, the asset freezes and travel bans are likely to target the Turkish military and captains of the drilling ships, rather than senior Turkish officials, diplomats said.

The decision aims to punish Ankara for violating Cyprus' maritime economic zone by drilling off the divided island. Cyprus was divided in 1974 after a Turkish invasion triggered by a brief Greek-inspired coup. Several peacemaking efforts have failed and the discovery of offshore resources has complicated the negotiations.