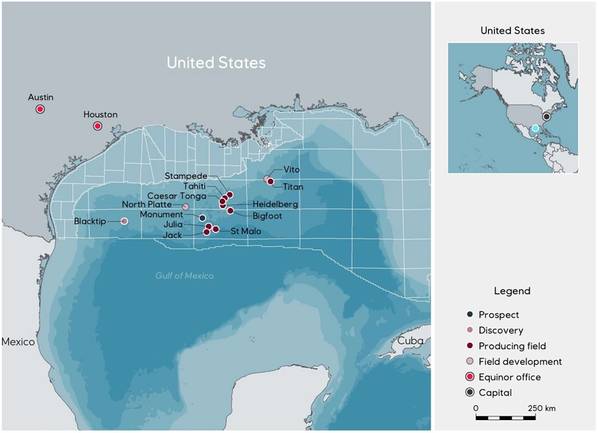 French oil major Total has awarded Worley a FEED contract for the North Platte field development in the U.S. Gulf of Mexico.

The offshore oilfield project, which marks the return by Total to the GoM as the operator, will be developed using a semi-submersible floating production unit.

The North Platte is a Paleogene oil discovery covering four blocks in the Garden Banks area in the Gulf of Mexico. It is located 275 kilometers off the coast of Louisiana in water over 1,300 meters deep.

"The project brings together Worley’s recently acquired capability for the floating production unit topside design with Intecsea experience for the design of the hull, mooring and subsea pipelines. Now under one roof, Worley’s expanded capability to deliver flexible floating production unit designs with capital efficiency and minimal time to market proved a key contributor to this award," Worley, formerly known as WorleyParsons, said in a statement on Thursday.

The FEED component of the project is being led by Worley’s Houston office with support from its Hyderabad office in India. The financial details of the deal were not disclosed.

The North Platte field straddles four blocks of the Garden Banks area. According to info shared previously by Total, the reservoir is of high quality, both in porosity and permeability, with thickness in places exceeding 1,200 meters.

The development will require the use of 20 kpsi technologies. The field development plan is based on eight subsea wells and two subsea drilling bases connected via two production loops to a newbuild, lightweight floating production unit (FPU). Production will be exported through existing oil and gas subsea networks.

Total is the operator of the North Platte with a 60% working interest, alongside Equinor (40%). Total also holds interests in high-potential exploration acreage in the Greater North Platte Area, and the FPU design provides for a possible future tie-in.