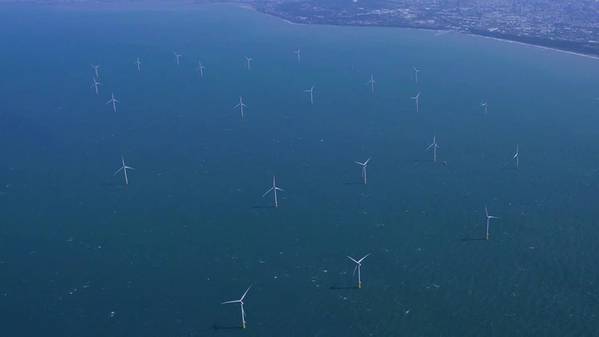 Danish wind energy developer Orsted is gearing up to launch its first big-ticket project financing in Taiwan, one of the world’s fastest-growing offshore wind markets.

Orsted is expected to mandate banks next month on an NT$61.9bn (US$2bn) 18-year loan for its offshore wind farms in Changhua county, presenting the island’s lenders with the seventh borrowing from the sector in the past four years.

New projects are likely to face liquidity constraints and fatigue among lenders concerned about exposure to the sector and single-borrower limits.

“We do not want to get overly concentrated in a single new sector or particular single borrowers as we see some sponsors are involved in different projects,” a senior loan manager at a top-tier Taiwanese bank said.

Although the NT$61.9bn loan is Orsted’s first jumbo borrowing in Taiwan, it has tapped lenders previously for smaller loans. In June last year, Orsted closed an NT$25bn five-year corporate loan backing the construction of offshore wind farms in Changhua county.

Fifteen lenders joined the deal, including eight state-owned Taiwanese banks that had never previously lent to an offshore wind financing.

Orsted is not only the sole sponsor of the Changhua 1 and 2a projects but also a junior partner in two others – Formosa I OWF Stages 1 and 2. German wind project developer Wpd, Australia’s Macquarie Group and Taiwan’s Swancor Renewable Energy are all investors in multiple offshore wind farm projects. (See Table.) 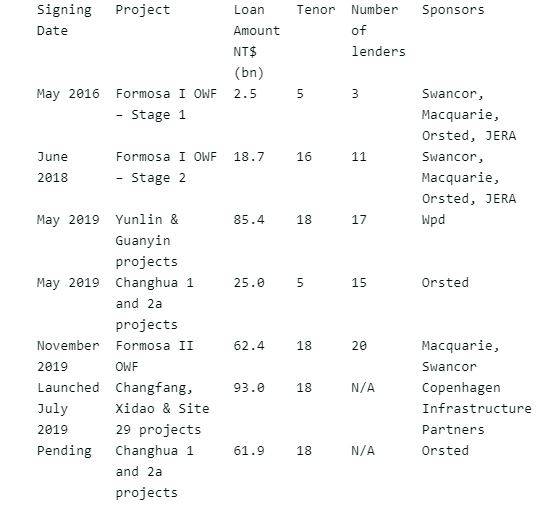 Although the wind farm financings offer more lucrative pricing than plain-vanilla corporate loans, some lenders are struggling to satisfy demand, especially on the tranches with export credit agency cover.

ECA support used to be welcomed given the non-recourse nature of the PF deals. However, some lenders feel the pricing on ECA tranches is not attractive when compared with plain-vanilla corporate loans that typically pay interest margins of around 60bp over Taibor.

“While most of the deals have ECA-backed portions, which provide us assurance to some extent, the pricing on these tranches doesn’t really reflect the high risks of the new sector,” said a second loan banker.

For instance, the ECA tranche on the CIP loan offers margins ranging from 105bp to 115bp over Taibor during the construction period, before stepping down to 75bp to 85bp during the first five years of operations.

While lender fatigue seems to be growing, more offshore wind developers are flocking to Taiwan to grab lucrative investment opportunities. Germany’s second-largest electricity producer RWE is considering making inroads in Taiwan as part of its plans to increase its presence in Asia. Vestas Offshore Wind, a joint venture between Japan’s Mitsubishi Heavy and Danish wind power giant Vestas Wind Systems, is working on an offshore wind power project off the coast of the western county of Changhua.

Within a short period of time, Taiwan has emerged as a leading offshore wind power market in East Asia due to its ideal conditions for wind energy and the government’s commitment to developing the industry.    Earlier this month President Tsai Ing-wen won re-election with a landslide victory, giving her energy policies a boost.    Tsai’s government has encouraged the growth of offshore wind energy since 2016 and has doubled its targets since the election victory.